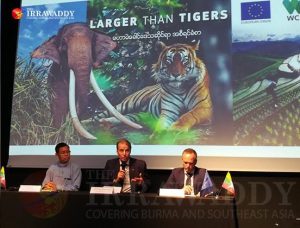 A panelist speaks at the launching of the “Larger than Tigers” report in Yangon on Tuesday. / Aung Kyaw Htet / The Irrawaddy

YANGON — Myanmar is home to 331 endangered species, according to the latest report from the International Union for Conservation of Nature (IUCN), including birds, orangutans, elephants, deer, freshwater turtles, pangolins and tigers.

The IUCN, an international organization based in Switzerland working to protect plants and animals and their habitats, launched the report, “Larger than Tigers,” in Yangon on Tuesday.

There are more than 5,000 species threatened with extinction in Asia and about 800 endangered species in the Greater Mekong Region, which includes Cambodia, Laos, Myanmar, Thailand and Vietnam. According to the report, the biodiversity of the Greater Mekong is under threat because of habitat loss and exploitation.

In Myanmar, more than 300 species are facing the threat of extinction, said May Lay Thant, national environment coordinator for the Wildlife Conservation Society (WCS).

“There are many threats to conservation efforts. Mainly, the habitats have vanished or the quality of habitats has declined. The excessive exploitation for illegal trade of wildlife and forest products is the biggest threat,” she said.

According to the report, plants and wildlife are exploited to make traditional herbal medicines, clothes and accessories, for food and for pets. It says hunting and poaching was found in about 70 percent of sanctuaries. The annual illegal wildlife trade in Southeast Asia and the Pacific region is worth about 17 billion euros ($19.2 billion).

In May, Myanmar’s Parliament passed the Protection of Biodiversity and Conservation Areas Law, which prescribes harsh penalties for hunting and illegal wildlife trading as defined by the Convention on International Trade in Endangered Species of Wild Fauna and Flora (CITES). Violators can face up to 10 years in jail.

In October, the Yangon Region government also imposed a ban on selling items made with wildlife parts at souvenir shops or selling wildlife curries at restaurants.

However, due to strong financial incentives, the illegal wildlife trade remains rampant.

“It is very dangerous to hunt tiger, but the profit from selling tiger is very big. Since the profit is greater than the cost, they will continue hunting no matter how dangerous it is, because there is such a huge demand for it,” said WCS program director U Saw Tun.

The World Wildlife Fund (Myanmar) has also warned that Myanmar’s elephant population could disappear in the next decade if the government fails to effectively prevent poaching.

Preparation of the “Larger than Tigers” report took two years and involved 28 authors with input from 382 experts from more than 150 organizations who participated in workshops or provided information and comments, across over 25 countries in Asia.

E.U. Ambassador to Myanmar Kristian Schmidt said the bloc would support Myanmar in maintaining its biodiversity and developing a green economy.

At an event in Naypyitaw in October, Myanmar authorities destroyed hundreds of seized elephant tusks, pangolin scales and other animal parts worth a combined $1.3 million on the black market.