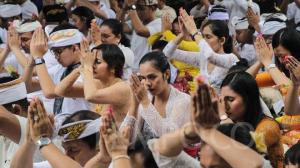 YOGYAKARTA, Indonesia – In preparation for the Hindu Day of Silence (Nyepi), thousands of people performed the Tawur Agung Kesanga ceremony today, March 6, 2019, at the Prambanan Temple in Sleman, Yogyakarta.

Other than from Yogyakarta and Central Java, the people came from Bali and other Indonesian cities as well. The ritual was attended by the Religious Affairs Minister Lukman Hakim Saifuddin on behalf of President Joko “Jokowi” Widodo.

“In this disharmony condition, those five elements may cause disaster for all creatures, so the five elements must be integrated to achieve happiness for the universe and all beings,” Wisnu added.

Wisnu further called on all people, especially the millennial generation, to have a dream. However, he also noted that such dream cannot be separated from national and the country’s dream. Wisnu added that the dream of the Republic of Indonesia is to achieve independence, unity, and prosperity.