Police lambasted for targeting LGBT community in raid in Jakarta 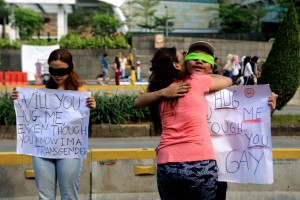 Love wins: A passerby hugs an activist campaigning for the rights of the lesbian, gay, bisexual and transgender (LGBT) community during Car Free Day in Jakarta on June 16, 2019. (JP/Seto Wardhana)

JAKARTA –  Civil groups have criticized the Jakarta Police over the criminalization of the lesbian, gay, bisexual and transgender (LGBT) community following a recent raid on a private party in Kuningan, South Jakarta.

On Aug. 29, police officers broke into an apartment where 56 males were holding a private gathering.

The police later named nine people, who were the party organizers, as suspects, while the 47 attendees became witnesses in the case.

The Civil Society Coalition for the Protection of the Rights of Vulnerable Groups criticized the force’s decision to name the party organizers suspects, saying the charge was unsuitable as the organizers did not hold the party for profit.

The coalition – consisting of several civil groups including the Institute for Criminal Justice Reform (ICJR), LGBT rights group Arus Pelangi and the Indonesian Legal Aid Institute (YLBHI) – also argued that partying in a private space could not be considered a violation of the law.

It went on to say that the police had violated the International Covenant on Civil and Political Rights, which was ratified by Indonesia through Law No. 12/2005, which restricts state authorities from arbitrarily entering citizens’ residences. “The state shouldn’t use criminal law to target certain groups. The police shouldn’t justify ways to obtain evidence that violate the suspects’ rights,” the coalition wrote in a statement on Saturday.

The coalition also argued that the police had ignored the suspects’ rights to a fair trial during the raid and investigation as the force did not notify their relatives about the arrest. The police only made an announcement about the raid five days later during a press briefing.

Civil rights groups also lambasted the police for not providing legal assistance to the suspects and witnesses during the investigation, although it is guaranteed by Article 54 of the Criminal Law Procedures Code (KUHAP). “We urge the Jakarta Police to prioritize the fair trial principles and stop using all means that violate the citizens’ privacy.

The National Commission on Human Rights [Komnas HAM] should ensure that the case won’t become a precedent for future persecutions against LGBT groups.”

Being LGBT is not illegal in Indonesia, but members of the community have persistently faced discrimination from authorities, society as well as radical Islamic groups.

United States-based Pew Research Institute found in 2019 that only 9 percent of Indonesians agreed that homosexuality should be accepted by society.

Although the figure had increased from 3 percent in 2013, it was still far below other countries, including the neighboring Philippines, where 73 percent of respondents responded that they were tolerant of homosexuality.