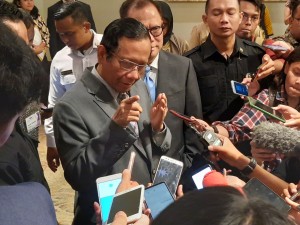 JAKARTA – In response to controversy surrounding the candidacy of incumbents’ and political elites’ relatives in the upcoming regional elections, Coordinating Political, Legal and Security Affairs Minister Mahfud MD has said that the nepotism is not against the law, nor is it inherently contradictory to the country’s democracy.

According to Mahfud, the practice of nepotism is inevitable in any major political event, including the regional elections set to take place on Dec. 9. “Many of us may dislike nepotism. But we have to admit, there’s no legal or constitutional reason to prevent a person from being running for office based on nepotism or [family connections],” Mahfud said during an online discussion on Saturday as quoted by kompas.com.

He said Indonesia was not unique in that regard, and that nepotism was not necessarily a bad thing.

Mahfud then cited an example in Bakalang, East Nusa Tenggara, where the sibling of a local politician offered to take over their relative’s post due to the latter’s incompetence.

“So those who practice nepotism don’t always have bad intentions,” he added. Political discourse surrounding the forthcoming regional elections has recently been rife with speculation regarding the candidacy of several family members of the country’s top officials.

Among them are President Joko “Jokowi” Widodo’s eldest son Gibran Rakabuming Raka and son-in-law Bobby Afif Nasution, who are running in the mayoral races in Surakarta, Central Java, and Medan, North Sumatra, respectively.