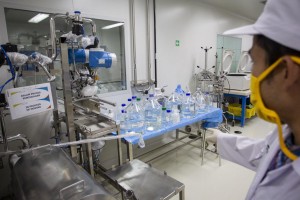 The President claimed the national consortium tasked with developing the potential vaccine was currently in the process of making “vaccine seeds”. “The process is 30 to 40 percent done,” he said, expressing hope that clinical trials could begin early next year. “God willing, the vaccine will be ready for production by the middle of 2021,” Jokowi said.

Named after the color of Indonesia’s flag, the Merah Putih (red and white) vaccine candidate is being developed by a national consortium under the Research and Technology Ministry, led by the Eijkman Institute for Molecular Biology.

The team, comprising around 10 young researchers, is developing a vaccine specifically for the strain of the virus that has spread in Indonesia. Eijkman director Amin Soebandrio said previously that the Merah Putih vaccine candidate was expected to cover at least 50 percent of Indonesia’s vaccine needs.

Among the suppliers is China’s pharmaceutical Sinovac Biotech, which has been closely cooperating with Indonesia to develop its vaccine candidate. Together, they began phase III clinical trials of the vaccine candidate in August, with tests being carried out on 1,620 volunteers in Bandung, West Java.