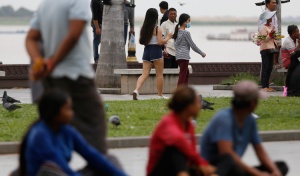 A woman wears revealing shorts in the capital. KT/Siv Channa

The Ministry of Interior’s new public order draft law which aims to strengthen peace and security by regulating public behaviour, including imposing a dress code, has drawn mixed reactions.

The draft law announced on June 15, currently consists of eight Chapters and 47 Articles which outline the criteria for the protection of public order through laws on tradition, security and image,  Ouk Kimlek, a  ministry secretary of state, said yesterday.

“One of the 47 articles is in regard to demarcating the correct dress for men and women, such as forbidding women from wearing extremely short dresses or men from going shirtless in public,” he said.

However, there has been a mixed reaction to the draft law, with some citizens and organisations saying they are too vague and will exacerbate discrimination against women.

Meung Chansomanita, a university student, said she is dissatisfied with the draft, noting: “I personally was shocked when I first found out about the draft law because it’s quite sudden and I believe there’s not been much involvement from the public or information from domestic media regarding the laws proposal.”

“From my perspective, the law threatens women’s rights rather than protects them, especially women in the entertainment industry.”

Catherine Harry, a Cambodian feminist well-known for her blog “A Dose of Cath”, said yesterday the draft law could adversely affect women more than men.

“Even though the draft law mentions rules for how men should behave and dress, it comes from a different perspective. They do not use words like cultural protection or preservation when trying to enforce laws on men as they do with women,” she said.

“There are laws in other countries which concern dress conduct, but that does not mean they should be applied in Cambodia. The fact is, most public officials are men and they cannot understand the hardships women face, yet they are making the decisions on this draft law,” said Harry.

Chak Sopheap, executive director of the Cambodian Centre for Human Rights,  also expressed her concern over the draft law, saying it could undermine the current rights of Cambodian citizens.

“This law contains numerous provisions dictating how people should present themselves publicly and I am apprehensive these will be disproportionately used against women exercising their fundamental freedoms,” she said.

‘For example, Article 36 of the draft law prohibits men from wearing “only trousers but no shirt in public areas” and women from wearing certain clothes that are either “too short” or “too see-through”.

“This draft does not explain what constitutes ‘too short’ or ‘too transparent’, leading to ambiguity,” Sopheap said.

She added that the Article imposing restrictions on items of clothing also undermines the individual autonomy of citizens.

“While the draft law on paper also applies to men, the reality is men do not face the same discriminatory gender stereotypes or societal expectations that women do in practice and are rarely subject to intervention for clothing being too revealing,” said Sopheap.

She said social values, which are what the draft law attempts to cover, are, by their very nature, arbitrary, relative and constantly changing.

“National tradition and dignity, therefore, are not a satisfactory bases for law and do not meet international standards. The draft law currently lacks clarity and leaves citizens unable to determine what activities are prohibited,” Sopheap added.