Women’s Day in Malaysia capital Kuala Lumpur: Activists speak in rally, but stay anonymous out of fear for safety

KUALA LUMPUR, March 8 — Activists including an Orang Asli representative from Kelantan and advocates against child marriages celebrated their right to freedom of speech by speaking out during a rally today in Kuala Lumpur, but chose not to identify themselves due to safety concerns and fear of possible online bullying and cyber harassment.

Volunteers who helped organise the Women’s March Malaysia today in conjunction with International Women’s Day today said this was a move to protect the safety of the activists.

Juana Jaafar, one of the volunteers who all organised the event in their personal capacity, spoke of past incidents during the annual event where speakers are targeted online on social media.

“For some context, every time we have International Women’s Day march, the march is always starting peacefully and ends peacefully, but when we go home, individuals get attacked on social media.

“This is a huge, huge problem. Because on the one hand, you have possible police action on event organisers, but on the other hand there is so much violence happening on the internet and the authorities don’t do anything about that

She said that online violence does not garner as much attention as other forms of violence that are reported on, noting however that “online violence is almost part of the reality of women coming together”.

When asked if the activists had themselves requested to have their names withheld due to them not feeling safe to do so, fellow activist Angela Kuga Thas said this was done out of precaution.

“It’s a precautionary measure, I think. Because people have targeted them, doxed them, in terms of last year,” she said, referring to the practice of tracing and publishing private information of those targeted.

“So I think it’s only fair until that space opens up when people can be themselves and actually say their names. That will be another day, hopefully next year,” she said.

Angela also highlighted the roles of leaders who have many followers, saying that they should show greater integrity and not encourage hate despite possible discomfort with the messages voiced out by women during today’s rally.

“Media can open the space up so that we can have these kinds of difficult conversations.

“They may not be comfortable with certain people speaking up because of different laws. But I think they need to take a step back and also listen because these are all Malaysians talking. And also, we have people who put in their letters because they are refugees. No one should feel unsafe in Malaysia,” she said.

Just before the event ended, organisers had urged participants to not go home alone but to stay in groups to ensure safety, and to also seek support if they become victims of online attacks, and to not engage with those making hateful remarks but to report them to the social media platforms.

Also on the website of the organisers were further tips for participants to stay safe if targeted for online abuse and cyber stalking, as well telling them that they can request for their photos and videos during the march to be removed from the internet if uncomfortable with such content.

Organisers have also opened a support desk for participants who are targeted, which will respond to request for help in 24 hours. 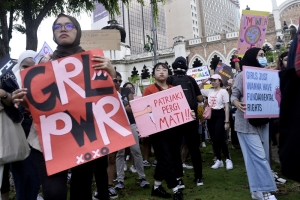 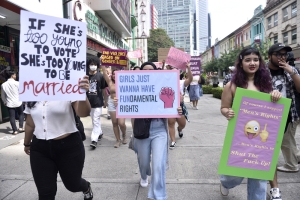 The organisers confirmed that advance notice of the rally had been given to the police, who were present this morning to facilitate the event.

Juana, who said the organising committee did not have any non-governmental organisations, noted that the march today stared and ended as planned and safely without any incidents.

Juana highlighted the issue of climate change, which is one of the latest additions to the demands in the annual march and which she said resonates with youths.

“We hope people will start talking about national action plan for climate crisis because this is something that we still don’t have any public conversations on.

“We just know we love the environment, we save the environment but we don’t have a real plan. So the demand today — we want to see what is the plan actually because globally this is a crisis,” she said.

Juana highlighted that girls and some women were unable to attend the rally today to speak for themselves and could only send in their views via letters that were read out, due to provisions under the Peaceful Assembly Act such as the bar against children or those aged below 16 from attending rallies.

The seven demands this year include calling for an end of all violence based on gender & sexual orientation; the ban of all child marriages; ensuring the right and freedom to make choices over their own bodies and lives; equal pay for work of equal value.

The other demands are for the enactment of a Gender Equality Act; equal public and political participation; as well as a call for a declaration of “climate crisis” and the formulation of a national plan to mitigate climate crisis.

Angela said the organisers were happy that at least 300 to 400 turned up today despite concerns regarding the Covid-19 viral outbreak, while also highlighting precautions such as advising those with flu to not join the march.

The organisers had also prepared hand sanitisers for use during the march.

Angela also noted the diversity of the crowd who came for the event, as well as support from male participants.

“I think the diversity is what we should actually celebrate, and the fact we have come together from all walks of life — women who are differently educated, women who have different opportunities, women who spoke about their issues.

“I’m really very happy also to see men come out and support women rights and gender equality and they have given the space and whole platform to us to speak.

Earlier one of those who had spoken out during the rally was a woman who had came from Ipoh for the event, and who identified herself only as being part of women workers demanding for their right to fair pay and for the right to have unions instead of being bullied.

In her speech, the woman who did not identify herself said that there were union busting efforts at the company where she worked, with working hours increased but with shift allowances decreased for their hospital-linked work.

At the rally today predominantly attended by youths and with many joining such an event for their first time, politicians were markedly absent at the march except for several leaders of Socialist Party of Malaysia (PSM) — a party often known for its work in championing the rights of the marginalised and workers — who were sighted among the attendees.

Among the speeches made by activists include the call for rally participants to press for lawmakers to change existing laws to ban child marriage in Malaysia.