In ASEAN, gender equality still very much a ‘tick-the-box’ issue

Foreign Minister Retno Marsudi (left, facing camera) poses with other female foreign ministers (left to right) of the European Union, South Korea, Australia and Canada at the ASEAN Regional Forum Retreat in Singapore in 2018. Retno is the only female foreign minister in ASEAN. (-/courtesy of ASEAN Secretariat) 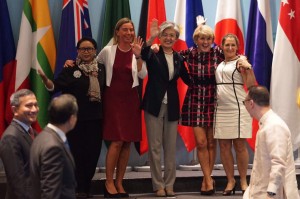 JAKARTA, Indonesia – A look at ASEAN’s busy calendar of annual meetings suggests that the organization is still predominantly run by men – currently, nine out of 10 ASEAN leaders and foreign ministers are male.

Myanmar’s State Counselor Aung San Suu Kyi stands out as the only woman to helm a Southeast Asian nation.

Similarly, Indonesian Foreign Minister Retno LP Marsudi is the country’s first woman to fill the role, and she is currently the only woman among top diplomats from the region.

In ASEAN’s 53 years of existence, women remain underrepresented among its elite and bureaucracy, with activists believing it has much to do with cultural entrenchments and the lack of political will to make gender equality and women’s empowerment a more prominent goal.

Historically, only a handful of Southeast Asian nations have appointed women as foreign ministers.