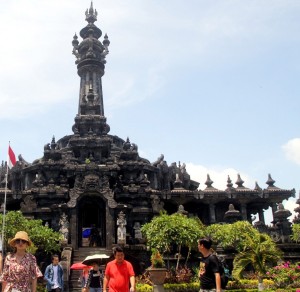 Chinese tourists enjoy Bajra Sandi monument tour, Denpasar, Bali, on Wednesday January 29. 2020. As a result of the spread of the Coronavirus, that the number of tourists visiting Bali has dropped with the cancellation of 81 flights to China from January 13-27 2020. JP/Zul Trio Anggono/sas/20 (JP/Zul Trio Anggono)

JAKARTA, Indonesia – The government will provide discounts of up to 30 percent for both foreign and local travelers in a bid to revive Indonesia’s tourism, as more tourists cancel their vacation plans to the country over fears of the deadly coronavirus outbreak.

Unveiled by President Joko “Jokowi” Widodo during a Cabinet meeting on Monday, the plan will be relayed to travel companies, airlines and other related industries.

“I met with the finance minister this morning and we will weigh the possibility of providing a discount or incentive of up to 30 percent of actual prices to foreign tourists,” he said.

No details of the incentives have been announced but related ministers said that discounts would be applied to tour package to certain destinations and service fees waived on airlines at local airports, among other measures.

Finance Minister Sri Mulyani said the details of proposal would soon be discussed with other related ministries, such the Health Ministry, Tourism and Creative Economy Ministry, Transportation Ministry, as well as State-Owned Enterprises (SOE) Ministry.

“Everything is currently being finalized, including how long the [initiative will run]. We are still calculating the different incentives offered during the low season and peak season.”

She added that the special offers would be supported by the state budget but did not elaborate on how much the government would set aside as a budget.

Under the plan, tourists visiting certain destinations will, among other deals, get discounts on flights and hotels.

Meanwhile, for business players in tourism-related industries such as travel agents and airlines, the government will offer several incentive that can help them pass through the difficult time.

“For instance, state-owned enterprises such as Pertamina and Angkasa Pura airport operator will provide incentives to airline operators. We will offer them in a package,” Sri Mulyani said, adding that the incentives can be in the form of a tax reduction, lower airport fees, lower handling fees, possibly lower jet fuel prices and the ease of obtaining airport slot permits for airlines.

“For example […], many airlines from Eastern Europe want to fly to Bali, but the problem so far has been the unavailability of slots. So, we see opportunities there,” Transportation Minister Budi Karya Sumadi said earlier.

Meanwhile, Tourism and Creative Economy Minister Wishnutama Kusubandio said on Monday that discounts may be given to tourist visiting destinations such as Bali, Likupang in North Sulawesi, Bintan and Batam in Riau Islands, Yogyakarta, Lombok and Labuan Bajo.

The ministry plans to offer a tour package that includes flights, accommodation and tickets for attractions with promotional rates in cooperation with online travel agents and tour operators.

“We will decide the incentive this week, we will have a follow-up meeting [on Tuesday]. We will coordinate so the incentives can be effective in reviving tourism,” he said.

The coronavirus outbreak had been a blow to Indonesia’s travel industry, with massive cancellations of flights and hotels.

The Indonesian Hotel and Restaurant Association (PHRI) has recorded at least 20,000 cancellations for Bali since the rise in the new coronavirus in early January.

The outbreak has also severely hurt local airline operators as a result of a government-imposed travel ban to and from China. Flag carrier Garuda Indonesia, for example, has halted 40 weekly flights to mainland China, while Lion Air Group, the largest private Indonesian airline, has suspended 30 weekly flights to China.

The tourism minister said Indonesia could suffer potential losses of up to US$2.8 billion from Chinese tourists, whose number have reached an average of 2 million travelers.