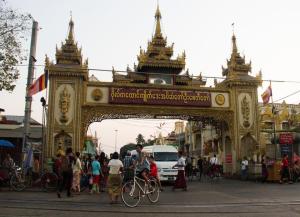 People mill around the entrance of a pagoda in downtown Yangon. Photo: Mar Naw/The Myanmar Times

NAYPYITAW, Myanmar – The Ministry of Hotels and Tourism proposed a temporary halt to tourist travel to and from China as part of the government’s effort to prevent the deadly COVID-19 virus from entering the country.

The government now allows Chinese tourists to apply for visas online or at the Myanmar Embassy in China, but they must secure a medical certificate and assure that they have not visited Hubei province, the epicentre of the epidemic, for at least 14 days before travelling to Myanmar.

Myanmar has stopped issuing visas on arrival to Chinese visitors and is considering closing its border crossings with China.

U Win Zaw Win, chair of the Mandalay Tour Guide Society, said he prefers allowing Chinese tourists to come into the country as long as they are screened and approved by the Health Ministry.

U Khin Aung Tun, vice chair of the Myanmar Tourism Federation, said that tour bookings from China have already declined by half because airlines have halted flights.

He said, “We have to face that this is happening globally. We need to protect our country. If something happens, the number of tourists from other countries may decline.”

U Khin Zaw, adviser to the Ministry of Hotels and Tourism, said outbreak has given Myanmar an opportunity to review its policy, which had focused on Chinese travellers since the Rakhine State refugee crisis caused a steep decline in Western tourists two years ago.

While an influx of Chinese tourists since late 2018 caused a significant increase in foreign tourists, it was not accompanied by a significant rise in tourism revenue due to the so-called “zero dollar tours” offered by Chinese travel agents.

Zero-dollar tours are cheap tour packages that attract many Chinese visitors because they cover meals and accommodation but require the tourists to follow an itinerary that includes many shopping stops.

Tourism operators said the outbreak will give the industry an opportunity to diversify its tourist mix.

As of Tuesday, mainland China reported 1868 deaths from 72,436 cases of the virus, mostly in Hubei.