JAKARTA, Indonesia –  The narrow sidewalks of Jalan Kebon Sirih in Central Jakarta are now occupied by refugees and asylum seekers who were kicked out of their tents near the immigration detention center in Kalideres, where they had been seeking refuge in the past year.

In the past two weeks, they’ve pitched up new tents lined with dingy carpet and hung mosquito nets off tree branches on the sidewalks, just around the corner from the UNHCR’s Jakarta headquarters. 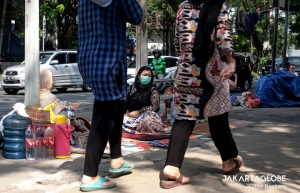 A woman from Afghanistan rests under a Transjakarta bus shelter on Jalan Kebon Sirih on Monday. (JG Photo/Yudha Baskoro)

Most of the refugees are from Sudan and Afghanistan. At least 30 of them live rough in front of the UNHCR building, where their asylum and refugee status applications are slowly being processed.

Lisa, a 15-year-old girl from Afghanistan, sleeps in a tent with her mother and older brother.

“We lived in Kalideres for a year and a half. A week ago we were told to move here. We’re sleeping in a tent now, just like we did in Kalideres,” Lisa told Jakarta Globe on Monday.

A mother and her child take a nap on the pavement. (JG Photo/Yudha Baskoro)

“We’re waiting for the UNHCR [to process our asylum application]. [We don’t have any money,] if we have money why are we sleeping here out on the streets,” she said.

Lisa said she and her family had arrived in Indonesia in March last year. She said the International Organization for Migration had arranged resettlement for her father, but the rest of the family now face an uncertain future.

“My dad lives in a house [arranged by the migration agency] and sometimes he visits us. Me, my mom and my brother have no plans [for resettlement]. My dad is not allowed to work here, so we have no job and no money. Life is hard. In Kalideres, there were lots of snakes,” Lisa said.

She said she and her family want to eventually resettle in Australia, but they would not mind being moved to another safe country.

“We want them [the UNHCR] to help us. I want to go back to school,” the young girl said.

Abdul Nagib, a 35-year-old man from Sudan, wishes for the same things as Lisa.

“I have been in Indonesia for more than a year. I was living on the street in Kalideres for 10 months, and here for two weeks. I’m still waiting for the UNHCR to give me a proper home, food and drinks,” he said.

Abdul said he and the other refugees have been relying on random meals being donated by passersby. He had already spent all his money and can now only sit idly by while waiting for the UNHCR to process his family’s asylum application.

“We live like animals out here on the streets. My wife is seven-month pregnant. I don’t know where I will take her when she goes into labor,” he said.

Jakarta Globe has contacted the UNHCR to find out what is going to happen to these stranded refugees but has not received a reply.

Indonesia is not a party to the UNHCR’s 1951 Refugee Convention or its 1967 Protocol. It also does not have a refugee status determination system in place.