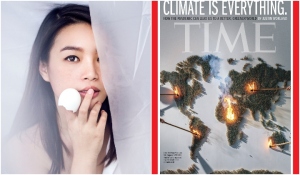 The cover of TIME Magazine’s 26th April 2021 issue on the climate crisis is a powerful representation of our planet’s reality. While we greatly admire the mixture of beauty and doom on the cover, we were pleasantly surprised to find out that it’s created by a Malaysian artist!

Meet Sabah-born artist and architectural designer Red Hong Yi, who is known for creating stunning sculptures and paintings using everyday objects and materials, or the artist who ‘paints without a paintbrush’.

For the “Climate is Everything” cover of TIME, Red and her six-person team took two weeks of 8-hour long days to painstakingly fashion a 2.3m x 3m world map using 50,000 green-tipped matchsticks.

Then, it was set on fire and the entire artwork burnt to a crisp in two mere minutes.

“My team and I spent two weeks sticking matchsticks non-stop for 8 hours a day,” she wrote on Instagram, “and then we watched the piece burn down in two minutes.”

“The analogy is that the earth was formed over millions of years, but we can just destroy it in a short amount of time.”

As the Covid pandemic continues to assail the world, we are reminded more than ever that no country is unaffected by global crises, whether it is a pandemic or economic collapse or, as this special issue highlights, global warming and climate change.

In an interview with TIME, Red explained that this piece represented how the global climate crisis touches all of us, no matter where we live.

To create the world map, the dimensions and positions for the matchsticks were first designed on a computer. Red then laser-cut the holes onto a board and each green matchstick – a metaphor for trees- were inserted by hand.

According to Red, the artwork was a challenge as it could literally blow up. So numerous safety measures were put in place before the world was set ablaze.

The piece was tilted at a 45 degree angle to ensure that the flames would not rise too high, fire retardant paint was sprayed onto it and firefighters were also on standby in case things go south.

“It felt like the world was suddenly really small and kind of in our hands. When we burnt it down, the flames grew and it was just scary.”

That wasn’t the only Malaysian touch for the TIME cover, though. The “Climate is Everything” cover image was photographed by Malaysian photographer Annice Lyn, co-founder of Women Photographers Malaysia who also recently won at the 2020 Women Of The Future Southeast Asia Awards.

The Sabahan artist who’s making a difference with her art

While in lockdown in Kota Kinabalu last year, Red used her art to speak out against racism by creating portraits made using food items. The series titled “I Am Not A Virus” were in response to the spate of anti-Asian sentiment and racist attacks stemming from ignorance about coronavirus.

Her Kopitiam series of art made out of coffee, painted with coffee cups, chopsticks and spoons, were also featured on Uniqlo clothing in December 2020.

The Kota Kinabalu lass’ work has been exhibited at H Queens in Hong Kong, the Asian Art Museum in San Francisco, World Economic Forum in Davos and Anchorage Museum in Alaska.

Collectors of her work include JP Morgan Chase Bank and actor Jackie Chan. Her art has been featured on publications including Wall Street Journal, TIME, and New York Times.