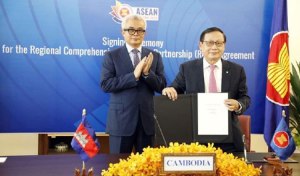 Deputy Prime Minister and Minister of Economy and Finance Aun Pornmonirath (L) and Sok Sopheak, secretary of state at the Ministry of Commerce, during the signing of the RCEP agreement in Mid-November last year. Supplied

PHNOM PENH – A new study by the United Nations Conference on Trade and Development (UNCTAD) has revealed that a number of ASEAN countries will face significant tariff revenue losses as the regional comprehensive economic partnership (RCEP) comes into force upon its ratification and implementation.

RCEP was signed virtually by its 15 participating countries in November 2020 but has yet to be ratified by all of the signatories, apart from China and Thailand.

The report focuses on goods and estimates the impact of RCEP on the net exports and the balances of trade (BOT) of RCEP member countries by examining the addi­tional market access that the agreement can generate for ASEAN countries. It uses sophisticated analytical simulations available via the World Bank’s World Integrated Trade Solutions analytical tools to estimate the impact of tariff liberalisation under RCEP. The analysis uses the sensitive lists (SLs) and tariff rate quotas (TRQs) in the schedules of each member of RCEP. This is the only methodology that provides results at product-level disaggrega­tion incorporating SLs and TRQs.  The results show that ASEAN will be a net loser in terms of its existing BOT post RCEP because BOT will deteriorate by 6 percent per annum. Imports into ASEAN will increase much more than its exports.

“In this case our study shows that tariff liberalisation under RCEP will worsen ASEAN’s trade balance by 6 percent per year,” said Banga.  “While the trade balance will improve for some of the non-ASEAN countries in RCEP, the maximum gains in terms of increased net exports will go to Japan.” she added. Banga also said COVID-19 has increased the development challenges facing ASEAN countries and they will need to revive their industrial sectors and create jobs.

“This will require generating additional financial resources. Tariffs are simple and effective tools in the hands of governments, not only to generate revenues but also to limit imports of luxury items that affect a country’s balance of payments. It is important for countries to make an informed decision with respect to signing or ratifying FTAs,” Banga added.

There are hidden costs that must be reviewed in the RCEP agreement based on Banga’s study because, instead of increasing exports, many ASEAN member nations will face increased imports post RCEP.  “Needless to say, countries that [will] benefit from the RCEP regional value chain scheme are those that are ready with know-how, technology, a strong brand or that are exporters of finished products targeted primarily at the ASEAN market. There is a possibility that a country with an underdeveloped level of industrialisation will only become a place for the production of semi-finished products [because of its] low labour wages and taxation. In addition, there is the potential for trade circumvention in order to obtain tariff preferences from the aspect of a goods nationality. This is the potential hidden cost from RCEP related to rules of origin, especially for ASEAN countries like Indonesia”.

The study noted Cambodia, Malaysia, Myanmar and Thailand will see the greatest deterioration in their trade balances, while Malaysia, and Cambodia will face significant government revenue losses. Cambodia’s potential revenue loss is equivalent to 1.24 percent of the Kingdom’s 2019 GDP.  This equates to the 1.28 percent of GDP that current health expenditures in the Kingdom represent.