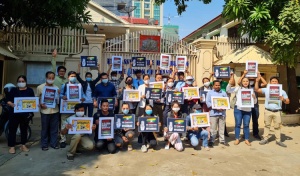 Members of Cambodian NGOs, trade unions and associations gather in front of the Myanmares Embassy in Cambodia. Facebook

PHNOMPENH – Government officials have said any protests in Cambodia  regarding the recent bloodless military coup in Myanmar do not reflect the government’s position, as the Kingdom adheres to Asean’s principle of non-interference.

The reaction was made amid some local non-governmental organisations (NGOs), trade unions and associations in Cambodia having strongly condemned the February 1 military coup in Myanmar, saying it “undermines the democratic will of the Myanmarese people”.

“We stand in firm solidarity with the people of Myanmar in their peaceful pursuit for the respect of the protection of democratic space,” said Chak Sopheap, executive director of the Cambodian Center for Human Rights on her Facebook page.

A group of NGOs and trade unions on Friday last week also gathered outside the Myanmarese Embassy in Phnom Penh where they submitted a joint petition demanding for the immediate release of the deposed state counsellor Aung San Suu Kyi and the cabinet members and individuals who are “fighting for democracy” in Myanmar.

The 60 different NGOs , civil society groups and unions in Cambodia that submitted the petition said they support democracy and human rights in Myanmar and urge the military to respect the will of Myanmarese people.

Chin Malin, Ministry of Justice spokesman, said yesterday that Cambodia will not interfere with Myanmar’s internal affairs, saying the government is not involved with any protest against the military coup in the Kingdom in any way.

“The protest did not reflect the government’s position. Sometimes they (NGOs) follow their own agenda or the tendencies of their donors,” he said.

“For the government, we consider the national and common interest as well as the interests of international relations, adhering to international principles and the Asean Charter,” he said. “As an Asean member, we are not interfering in their internal affairs and we are respecting the sovereignty of the member states.”

Additionally, Malin called on local NGOs to not engage in any activity against Myanmar on Cambodian soil.

“It would be better for them to go to Burma (Myanmar) and join the anti-military protests than to engage in political activities from within the territory of Cambodia,” he added.

Malin seemed to echo Prime Minister Hun Sen who on February 1 said Cambodia is monitoring the situation in Myanmar closely. However, Mr Hun Sen said Cambodia will not make any comment on it because it is Myanmar’s internal issue.

Many countries have expressed concern over the coup, including Asean members such as Malaysia, Singapore, the Philippines and Indonesia. Meanwhile, the United States, Australia, Canada, France, Germany, Japan, New Zealand, Spain, Sweden, Turkey and the United Kingdom have condemned the coup and called for the release of detained officials.

US President Joe Biden’s administration last week also launched sanctions against Myanmar in response to the military’s coup against the elected civilian government.

The US Department of the Treasury said it has sanctioned 10 individuals and three entities “connected to the military apparatus responsible for the coup”. Biden also said his administration will freeze $1 billion in government assets held in the US.

Kin Phea, director-general of the International Relations Institute of Cambodia at the Royal Academy of Cambodia, has said the military coup in Myanmar is part of the historical legacy of the country where the military has had predominant power over the country’s politics.

However, he added that the military coup did not only affect Myanmar’s image and economy, but it also affected the entire region, especially Asean.