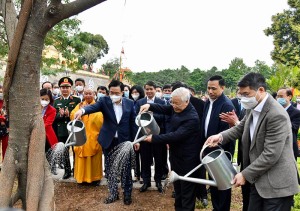 HANOI – Each locality plans to grow approximately one million trees in the year.

On February 17, Secretary General of the Communist Party of Vietnam (CPV) and State President Nguyen Phu Trong launched the campaign by planting trees at the Thang Long Imperial Citadel in Hanoi.

The campaign has been well responded by different localities nationwide. Hanoi alone, plans to grow roughly 500,000 trees together with developing 27,756 ha of forest and forest land.

Accordingly, each city and province plans to grow around one million trees in 2021.

Tree-planting festival is a long-lasting tradition on the New Year occasion that helps boost the green coverage in the nation that is listed among the hardest-hit by climate change.

It was initiated in 1959 by President Ho Chi Minh who laid the importance on the green coverage and keeping it for generations.

In the festival, people bring friends and families to share in the joyful activity of planting trees and being in the outdoors.

Role of forest in Vietnam

But the over-exploitation and unsustainable management of forests have resulted in the sharp fall of forest area to 28% in 1995 from 43% in 1943.

Since then, the government has paid due attention to afforestation that prompt the forest area to nearly 40% so far. Although the forest area is on the rise, it is necessary to improve quality of the forest and to realize sustainable forest management and importance of biodiversity conservation, according to forest experts.