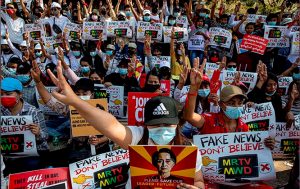 Young protesters stage a demonstration against the military coup near the Chinese Embassy in Yangon on Feb. 14. / The Irrawaddy

YANGON—“The whole country knowns this is unjust,” said 20-year-old Bella during a recent protest against the Myanmar military’s overthrow of the country’s democratically elected government.

She and her two friends have been protesting together in Yangon, Myanmar’s largest city, since the mass movement against the Feb. 1 coup started more than a week ago, marching in downtown Sule and at the Hledan junction, and staging sit-in protests to defy the military government.

Like their fellow citizens across Myanmar, the three young women woke up on the morning of the coup to shocking news. Their parents, who had lived through the military coup in 1988, could not contain their anger as they told them that the military had seized power and arrested the country’s leader, Daw Aung San Suu Kyi, among others. 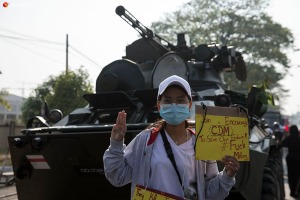 A young woman promotes the Civil Disobedience Movement while standing in front of an armored personnel carrier in Yangon on Feb. 15. / The Irrawaddy

“Since then, we have spent out nights worrying about what will happen, and about when they will cut off the local phone lines and the internet again. And wondering who will be detained next,” Bella said as she took part in a sit-in protest on Kabaaye Pagoda Road.

The military cut off TV channels, local phone lines and internet access after it seized power. Later, it restored entertainment channels, local phone lines and internet service but continued to block private local and international news channels and access to Facebook, Twitter and Instagram to stop people mobilizing protests. After many evaded the restrictions on social media by using virtual private networks, the military again cut off internet access from 1 a.m. to 9 a.m. on Monday.

After many evaded the restrictions on social media by using virtual private networks, the military again cut off internet access on Sunday night.

About 400 people, including officials, leading members and lawmakers of Daw Aung San Suu Kyi’s National League for Democracy, election commissioners, political activists, protesters and civil servants who have refused to work under the military, have also been arrested over the past two weeks. 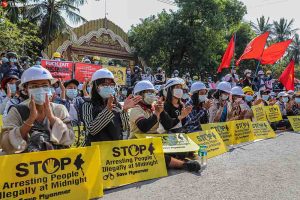 Students from Mandalay University of Foreign Languages stage a protest against the military regime on Feb. 14.

Anitia, a young woman with Bella, also shared her feelings. “Since Feb. 1, my days have become totally different. Every morning, when I wake up, the sickening feeling that we have to live under them [the military regime] is still there.”

The initial shock and sadness of having their freedoms and rights taken away by the military soon turned into anger and drove the young women onto the streets during the daytime; every night they join in the ritual of banging pots and pans, which has become a popular way of showing resistance to the military regime.

‘We won’t let them ruin our future’

“Our parents had to suffer under the [former] dictatorship,” Anitia said. “We won’t let them ruin our future as well.”

The three are among huge numbers of youths in their teens and early 20s who have taken to the streets over the past nine days and who represent a significant force within the mass movement nationwide, especially in Yangon and Mandalay. 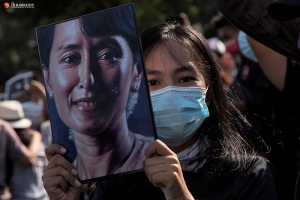 An anti-coup protester with Daw Aung San Suu Kyi’s portrait in Yangon on Feb. 8. / The Irrawaddy

Many of these young protesters, who proudly display their identities as members of K-pop and K series fandoms, weebs (Japanese pop culture devotees), gamers, football fans and Marvel fans among others, are attending the demonstrations dressed up as characters from movies, anime, games and Marvel films. At the forefront of large rallies, in addition to wearing colorful costumes and stylish fashions, they can be seen holding aloft colorful placards with well-chosen words satirizing the coup leader and expressing their disapproval and anger at the coup.

Their lively, entertaining and innovative methods of protests have attracted international attention and become a hit on social media, while receiving praise from older generations for being peaceful, creative and well-organized.

“You messed with the wrong generation,” has become one of the most-repeated slogans of the movement, referring to the members of Generation Z (or simply “Gen-Z” as they are affectionately known to the public). Generation Z is loosely defined as those born from the mid-to-late 1990s through the early 2010s. At a recent protest, a 15-year-old boy in a miniskirt and cross top stood out among a group of young demonstrators wearing colorful costumes and singing the popular revolutionary song, “A Yay Kyi Pyi”.

The boy, Eant Htoo Aung, said he donned the outfit to draw more international attention to what is happening in Myanmar, in the hope that the country can get help from the global community to fight against the military dictatorship.

“We don’t accept the military coup,” he said in a clear voice. “I am angry with that dictator who arrested Amay Suu [Daw Aung San Suu Kyi], who is very good to our country,” he continued, while holding a vinyl sign bearing the slogan “Free Amay Suu government”.

If it wasn’t for the military regime, the boy said, he would be attending his online classes or playing mobile games. But now he and his friends found themselves protesting on the street at the hottest time of day, demanding the downfall of the military regime, which he said had brought trouble to the country. Cora, a girl who was part of the same protest, said she had heard about former dictators from books and the older generation, but facing such a regime in reality had strengthened her opposition to dictatorship.

“Doesn’t he know the internet is our primary source for learning, especially in this time of COVID-19? How he could do that?” she said, referring to the internet outage and disruptions since the military staged the coup.

A group of second-year university students whose campuses were closed to prevent the spread of COVID-19 said they wouldn’t return to their classes, even if the military regime reopened them, until the country’s detained elected leaders are freed. Coup leader Senior General Min Aung Hlaing said the regime would soon reopen schools in a recent televised speech.

“We don’t accept that. We will only continue our education under the elected government,” Cora said. Her two friends agreed with her statement.

She was one of millions of young people who voted for the first time in November. Myanmar had 5 million eligible first-time voters at the time of the election.

“Given what happened to our votes, I don’t have any trust in them. I feel very bad about how it’s turned out, after getting the chance to cast a vote for the first time,” she said.

“We just want the old days back, before [Feb. 1]. We want our elected government to return and rule the country again.”