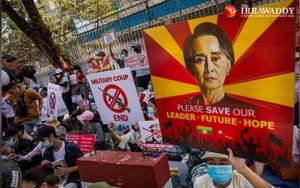 Protesters gathered in front of Russian embassy in Yangon on Friday (Feb. 12) / The Irrawaddy

China and Russia continue to defend Myanmar’s military, insisting that the armed forces’ seizure of power from the democratically-elected government is Myanmar’s internal affair.

Meanwhile a majority of United Nations members deplored the military’s actions during a special session of the UN Human Rights Council on Friday.

Myanmar’s military (Tatmadaw) seized power from the elected National League for Democracy government hours before a new parliament was set to begin on Feb. 1, saying the ousted government failed to act on its claims of voter list irregularities. The military detained civilian leaders, including the State Counselor Daw Aung San Suu Kyi, President U Win Myint and others. It also blocked internet service providers, restricted social media and established an 8 p.m. to 4 a.m. curfew.

Following the coup, the country seen ongoing nationwide protests opposing the military regime. Protesters have been met with a police crackdown, including arrests, shooting and the use of water cannons, injuring dozens. A w0-year-old protester was fatally shot in the head by police on Tuesday in Naypyitaw.

In light of the current situation, the UNHRC held its 29th special session on human rights to discuss the implications of the crisis in Myanmar.

Myanmar permanent representative at Geneva U Myint Thu defended the coup’s leaders. But the UNHRC passed a resolution, put forward by the UK and a European Union representatives: “[T]the Council deplored the removal of democratically elected government..” and called for the “immediate and unconditional release of all persons arbitrarily detained . . . and the lifting of the state of emergency.”

Nada Al-Nashif, Deputy High Commissioner for Human Rights, said the coup constituted “a profound setback” for the country after a decade of hard-won gains in its democratic transition.

However, Myanmar’s giant neighbor China distanced itself from the country’s human rights issues, with China’s representative to UNHRC saying, “What happens in Myanmar is essentially Myanmar’s internal affairs.”

That stance is consistent with China’s refusal— along with Russia— to condemn the military takeover during last week’s meeting of the UN Security Council.

Both China and Russia, which have long histories of good relations with the Myanmar military. Both now face Myanmar citizens’ denouncing them via an online campaign for supporting the military.

Myanmar protesters continued the demonstrations in front of both countries’ embassies this week, urging them not to support the military regime.

“We want the Chinese government to support our elected government and to stand with the people. We hope China does not support the coup leaders,” a protester in front of Chinese embassy in Yangon told The Irrawaddy on Friday.

Another protester who took part in an anti-coup demonstration in front of the Russian embassy in Yangon on Friday told The Irrawaddy, “We want them to hear our voices, therefore we have been marching to different embassies and the UN Office in Yangon.”

But Russia’s representative said that country believes “that settling a disagreement between the political forces in Myanmar is a purely domestic affair of the sovereign state.”

Russia urged the international community not to criticize the military regime, instead “providing practical assistance to the new authority of Myanmar to fulfill their obligations, including in the field of human rights.”

Japan, a close friend of Myanmar, expressed “great concerns over the seizures of power by the military on Feb. 1 and the detention of the democratic leaders.” A spokesman said the country “strongly hopes that the government, democratically elected by the people of Myanmar, will be swiftly reinstated.”

“Japan is also seriously concerned about the rising political tension and strongly urges the military and other security forces to immediately limit the use of force and other violence against the public,” the official statement said.

Echoing Japan, many western and European countries, including the US, UK, Canada, and South Korea, also strongly urged the Myanmar military to release all those “arbitrarily detained,” including State Counselor Daw Aung San Suu Kyi and immediately restore the democratic political system.

Tom Andrews, UN Special Rapporteur on the situation of human rights in Myanmar, said that even if election irregularities did occur, there was no justification for declaring a state of emergency, arresting the civilian leadership, and attempting to destroy Myanmar’s fledgling democracy.

“As the people of Myanmar demonstrate their remarkable courage and resolve, let us demonstrate our support of them and the principles and values that they are fighting for,” he added.