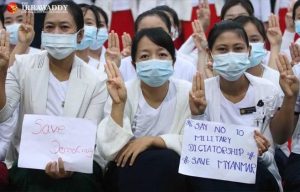 Myanmar’s civil disobedience movement has gained momentum across the country with thousands of civil servants, including in Naypyitaw, going on strike against military rule.

The “no recognition, no participation” approach was launched by medics last Wednesday and joined by increasing numbers of ministerial staff.

Staff at the Ministry of Investment and Foreign Economic Relations said in a statement that they are unwilling to work under military rule and had joined the movement. The protests expressed their belief in the basic rights granted under the 2008 Constitution, it said, calling on other civil servants to join the movement.

A Department of Social Welfare staff statement said: “We will get back to work only after power is handed back to the democratically elected government.”

U Than Toe Aung, deputy permanent secretary at Ministry of Construction, posted on Facebook that he was joining the movement on Monday.

“I strongly condemn the military dictators who forcibly seized power and unlawfully formed the State Administrative Council,” he wrote.

“I call on my colleagues to follow suit to help bring down the dictatorship.”

The public have backed the growing civil disobedience movement with mass demonstrations nationwide to demand the release of detained leaders and activists and call for an end to military rule.

Meanwhile, the military government continued to roll out its new administration, replacing ministers and their deputies at the Union, state and regional levels.