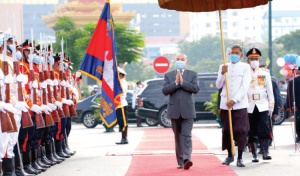 PHNOM PENH – The Ministry of Justice yesterday rebuked a call by former opposition politicians who want the government to amend the Constitution over the inviolable role of the King.

The reaction comes after a call made by former opposition leader Sam Rainsy who urged for the amendment of the current Constitution on the role of the King.

Ministry of Justice spokesman Chin Malin said yesterday the calls by ex-opposition leaders are “ridiculous”, and the King is well respected by most Cambodian people and an inviolable person.

“It would be ridiculous for them to cover up and defend their crimes [for insulting the King], then call for the constitution to be amended,” he said. “This proposal is unacceptable to the people because it is against the will of Cambodians.”

Malin said Rainsy and his followers are against the spirit of the constitutional monarchy.

“The establishment of the Constitution is based on two principles, the first is the spirit of national unity and reconciliation as per the Paris Peace Agreements, which adhere to a constitutional monarchy that the King shall reign but shall not govern,” he said.

“Second, it’s based on social reality, such as historical and cultural factors of Cambodia. If they only propose to amend the Constitution to protect their illegal activities, it is against the will of the people, contrary to the will of national unity and reconciliation and contrary to the context of Cambodia, which has the traditions, history and mindset of the Khmer people,” Malin added.

In a recent statement on Facebook, Rainsy said the Constitution can be amended anytime. He said since the first Constitution in 1947, Cambodia has also revised it for six times base on each regime.

“The King is a human being like us, not a deity descending from heaven. Everyone can be right or wrong,” he said.

Article 7 of the Constitution states that “The King shall be the Head of State for life. The King shall be inviolable,” while Article 8 says the King “shall be a symbol of unity and eternity of the nation.”

The King also a “guarantor of the national independence, sovereignty, and territorial integrity of the Kingdom of Cambodia, the protector of rights and freedom for all citizens and the guarantor of international treaties,” according to the Constitution.

Kin Phea, director-general at the Royal Academy of Cambodia’s International Relation Institute, said yesterday that he considers the call by ex-opposition politicians as “unacceptable”.

“It is unreasonable that they demand to amend the Constitution related to inviolability of the King,” he said. “They violate the King, They have the idea of being republicans who do not respect Cambodia’s monarchy.”

“We know that the legacy of the monarchy in Cambodia is a legacy of thousands of years of traditional history… In fact, after the 1970 coup, the monarchy collapsed and we had to wait more than two decades for the monarchy to return,” he added.

Phea said the King strictly respects the principles of the Constitutional Monarchy, adding the King also has “10 royal virtues” such as practising generosity, high moral character, philanthropic attitude, practising patience, and agreeability among others.

“He has never been involved in politics with any parties, so they should not insult the King or demand amendments to pave the way for them to continue insulting the King,” he said.

The charge against Rainsy was made just days after Minister of Justice Keut Rith ordered the prosecutor of the Municipal Court to take immediate legal action against him for “lèse-majesté”.

Rainsy, who is a rabid government critic, is currently facing a slew of legal problems in the Kingdom, in what he claimed is “politically motivated”, including a total of eight years in prison in 2019 for demoralising the armed forces and insulting the King.