‘Our Struggle Is Far From Over,’ Says Myanmar’s Karen Recipient of ‘Environmental Hero’ Prize 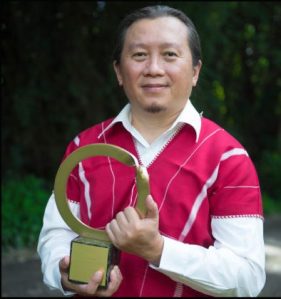 Ethnic Karen environmentalist Saw Paul Sein Twa has been awarded the 2020 Goldman Environmental Prize, which recognizes individuals for their “sustained and significant efforts to protect the natural environment.”

Saw Paul Sein Twa is one of the US-based Global Environmental Foundation’s six global “Environmental Heroes” for 2020. The prize has been bestowed by the foundation since 1989.

Seeking to preserve both the environment and Karen culture in Myanmar, Paul Sein Twa, 47, led his people in establishing the 1.35-million-acre (546,325-hectare) Salween Peace Park, a unique and collaborative community-based approach to conservation, in the Salween River basin in December 2018.

The Salween River basin is a major biodiversity zone and home to the indigenous Karen people, who have long sought self-determination and stewardship over their land. The Salween Peace Park, which is in Karen National Union-controlled territory in Mutraw (Papun) district of Karen State, represents a major victory for peace and conservation in Myanmar.

Paul Sein Twa is himself a resident of the Salween Peace Park area and has tirelessly advocated for environmental preservation, knowing that locals are the only true “conservationists of their communities.” Some 380 communities in 26 village tracts are inside the park, hosting more than 60,000 local people, who contribute to keeping their natural environment intact.

Since he co-founded the Karen Environmental and Social Action Network (KESAN) in 2001, he has worked to remedy many of the serious problems caused by decades of war and opposed environmentally destructive industrial projects such as the Hatgyi mega-dam on the Salween River.

“Our struggle is far from over. We must maintain the Salween Peace Park as a place that embodies our Karen vision of peace, cultural integrity and harmonious co-existence with nature,” he said during a virtual award ceremony on Tuesday morning. “This award is a step toward gaining the international and local recognition and support that the Salween Peace Park needs to secure itself.”