A makeshift sink for hand washing on the streets of Yangon. Photos – Andrew King

Mary Douglas’ 1966 book Purity and Danger illustrates how human societies make sense of the world by classifying things as “dirty” and “pure”.

Dirt is not just soil on the ground or mud on our shoes, she argued. What we think of as “dirt” changes according to our culture, and over time.

For example, in some Western households it might be acceptable to wear shoes inside the house, whereas Asian housewives will shudder at the thought of not leaving your boots outside the door. Likewise, spitting on the street is tolerated in some countries, but elsewhere “hoiking a loogie” is considered gross and “dirty”.

What is defined as “pure” and “dirty” can also change within a culture, depending on peoples’ access to knowledge and practices around hygiene.

Douglas argued that our definitions of “dirt” carry associations of danger, particularly when things cross boundaries – between the dirty and the pure; between the outside and the inside; the healthy and the sick.

Such a reordering of boundaries seemed to be taking place on the streets of Yangon this week, as teams of volunteers worked with city officials to disinfect the roads in the hope of preventing the spread of Coronavirus (COVID-19). 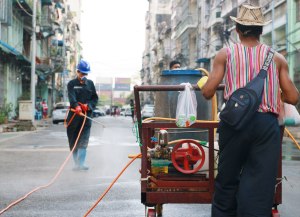 Teams of YCDC employees and volunteers spraying the streets with disinfectant.

Myanmar had no recorded cases of COVID-19 until an announcement by the Ministry of Health on March 24 – and that’s when things changed.

In her televised address to the nation State Counselor Daw Aung San Suu Kyi stressed the importance of hygiene in fighting COVID-19. A video of her explaining “how to wash your hands” was produced, and shared among Myanmar’s many millions of Facebook users.

The streets were soon full of makeshift sinks, hooked up to municipal water supplies via Myanmar’s ubiquitous blue PVC piping.

Hand sanitisers appeared everywhere too – on counters insides shops, beside lottery ticket displays and outside of monasteries. Inside the major shopping centers, security guards were even instructed to spray trolleys and baskets.

In a city where littering and spitting betel quid on the streets is common, the transformation has been remarkable. Peoples’ notions of “dirt” have changed.

A popular photo meme of a betel nut (gunya) vendor impacted by the lack of demand due to COVID-19 closures, now offering takeaway services.

A nation crazy for betel quid

On the 28 March the government ordered the closure of betel nut stalls, along with street markets and noodle vendors in the city. With falling sales for betel nut vendors, the streets already started to look cleaner with less red-stained pavements.

But walking across the streets of Yangon’s inner city this past week, it’s still possible to spot vendors selling their quid – either with their trolleys tucked away in the alley, or with another line of business (selling cigarettes, water and snacks).

“Sales are down by over half. People still buy it, but not as much as last week,” said a vendor in Yangon’s Chinatown.

Depending on their location some vendors say that they can make up to between K50,000 and K70,000 in a day, feeding the nation’s addiction to acrid-tasting nut. Those profits are down to around at K30,000 now, according to some vendors in the city.

Given the stall closures, social media was also awash (so to speak) with betel-related memes. In response to the government’s announcement, one popular meme was clear enough in its criticism of the nation’s betel nut addiction.

“The first shops to close should be the betel nut shops, and the first type of job to go, because betel nut spit will spread the virus everywhere,” the meme read.

In competition with the Ministry of Health official announcements, the original post received almost 3,000 likes within a few hours – then shared an impressive 17,200 times throughout the week.

Like restaurants, many betel nut vendors now operate by providing home delivery services. This was the subject of a more humorous meme on Facebook, which depicts a betel nut seller with the sign: “Sar Lun’s betel nut, available for home delivery”.

The COVID-19 health crisis is bringing out a change in some peoples’ attitudes towards betel nut chewing in Myanmar, at least on social media.

Another noticeable change in the city’s attitude towards hygiene can be seen in the street cleaning activities of the local government.

With fire trucks blocking off entry into the residential streets, the Yangon City Development Committee (YCDC) started a process of spraying down roads, paths and entranceways in downtown Yangon.

First the roads are cleared of vehicles, leaving the streets free of cars for many hours. Temporarily, and despite the underlying danger of an unseen virus in the air, the streets fill with school kids playing with a sense of abandon.

One resident on Bo Ywe road even asked for her apartment’s entrance to be sprayed, saying that she was sick of mess on the stairs that led-up to her room. “The smell of chlorine is much better than cat urine,” she said.

Young nuns walking down Bo Ywe Street after the neighbourhood was sprayed with disinfectant on Monday [March 30].

The street cleaning maybe more public spectacle than a real prevention though, as the government does its best to allay fears (while infection numbers continue to rise) about efforts to curb the spread of COVID-19.

But even if it’s a symbolic act, it’s still an important one.

For in the past Yangon lacked even the most basic civic services – such as waste disposal. Garbage would pile up on the street corners, left there for weeks to rot in the hot afternoon sun.

The city has cleaned up its act over the past ten years however, with the new government providing wheelie bins on street corners, community organisations have been allowed to decorate back alleys and businesses are permitted to renovate their buildings.

With the threat of the Coronavirus though, there has been a renewed focus on personal hygiene throughout the country. For many it is seen as a matter of life or death.

The notion of “dirt” and pollution changed slightly in Yangon this week, and may provide an impetus to redefine the city as a more “pure” space in the future – hopefully without the threat of another pandemic.