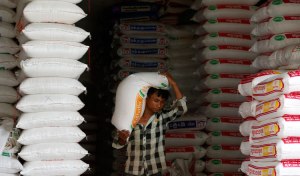 A worker stacks rice sacks in a warehouse in Phnom Penh. KT/Svi Channa

PHNOM PENH – The government and private sector have assured the nation that their combined stockpile of rice will be more than enough to supply domestic demand during the ongoing Novel Coronovirus situation.

With numbers of reported cases rising to 35 in the past few days, panic buying – a term used to describe bulk purchasing of essential goods such as food and fuel in an uncertain climate – has been witnessed in some stores in Phnom Penh.

In a joint statement between the state-owned Green Trade Company (GTC), an arm of the Commerce Ministry and the Cambodia Rice Federation (CRF), they said that media coverage of an increase in reported cases of the virus has sparked fear among the population. It added that when people panic buy, the subsequent food shortage leads to a hike in food prices.

“We appeal to the public not to be worried about the rice shortage because bulk-buying amidst the virus fear will enable some profiteers to increase price of milled rice,” the statement read, adding that members of CRF, together with GTC, has plentiful stocks of rice to sell in Phnom Penh’s markets and in provinces across the country.

To add further reassurance, the Federation noted both high milled rice and un-milled rice grains in stock in the warehouses of 400 companies. As well as being able to meet domestic demand, these volumes will be enough to meet export requirements.

As of March 16, the rice harvest for the 2019-2020 dry season ran at about 80 percent, equivalent to 2.3 million tonnes. Figures from CRF show that over the January/February period, the Kingdom exported about 136,499 metric tonnes of milled rice, an increase of around 22 percent when compared to the same period last year.

The statement followed a warning issued by the Ministry of Commerce (MOC), in collaboration with other government bodies, that it will take legal action against business owners, such as shopkeepers and market traders, who are profiteering from the outbreak situation by pushing up prices of essential goods.

“Officers representing the Cambodia Import-Export Inspection and Fraud Repression Directorate-General (Cam-control) will conduct spot checks at markets, shops, malls and stores and explain to sellers why they should desist from hiking up their prices,” said MOC spokesperson Seang Thay.

He said the measure is being taken to calm any potential panic or chaos in the population.

Dr Ka Sunbaunat, psychiatrist and former Dean of the University of Medical Sciences, speaking exclusively to Khmer Times, also called for calm, touching on the panic which ensued during the SARS outbreak in 2003, when Cambodians were tricked into believing that eating mung beans before midnight would prevent an infection.

“Cambodians are panicking, but this is not new to the people of this country. We  are prone to falling for baseless rumours and conspiracy theories,” he said.