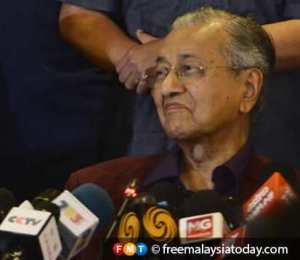 KUALA LUMPUR – Malaysian Prime Minister Dr Mahathir Mohamad has done it again. At the centre of two days of high drama and political manoeuvring, he has, wittingly or not, contributed to shaking Malaysia, and further causing its equities market to fall nearly three per cent.

The drama ceased with his resignation as prime minister and chairman of his Bersatu party, apart from ending one of the shortest-ever governments in Malaysia’s almost 63 years of independence.

The country is now without a fully-functioning government. It is left to be seen if Malaysia’s King will call for the dissolution of its parliament or allow political parties to realign and form a new government.

At its peak, predictions were that the Pakatan Harapan government had fallen, less than two years after a popular voter awareness saw the peaceful transition of Barisan Nasional’s rule since independence.

But instead, the latest drama saw the departure of Economics Affairs Minister Azmin Ali who is one of the longest-serving Parti Keadilan Rakyat (PKR) leaders; Zuraida Kamaruddin, the Housing and Local Government Minister; Baru Bian, the Works Minister, and Foreign Affairs Minister Saifuddin Abdullah – all from PKR. They are joined by seven other Members of Parliament of the same party.

While Mahathir’s resignation was accepted by the King, he was appointed interim prime minister in the evening and asked to lead the country until a successor is chosen along with the formation of a new Cabinet to govern the country.

The alleged wheeling and dealing come on the heels of Mahathir’s announcement at midnight on Friday that he would step down after the Asia-Pacific Economic Cooperation summit in November, sealing talks of a prior agreement to hand over the prime minister’s job to PKR party president Anwar Ibrahim.

Mahathir, who was Malaysia’s longest serving prime minister from 1981 to 2003, won the Langkawi island parliamentary seat in the 2018 elections and became prime minister once again. He promised to give up the seat to Anwar at a later date.

His decision to return to politics was motivated by a series of financial scandals involving former prime minister Najib Razak and the 1Malaysia Development Berhad which caused the country to be labelled as “a global kleptocracy at its worst”.

Following Anwar’s return to politics after being pardoned for sodomy in 2018, and winning the parliamentary seat of Port Dickson in the southern state of Negri Sembilan, the pressure has been on Mahathir to vacate.

Against that backdrop, the Barisan Nasional (of which Umno is part of) and Parti Islam Se-Malaysia which each have 42 and 18 seats respectively out 222 parliamentary seats in Malaysia, began engaging to form a Malay-Muslim coalition to serve the largest ethnic race in the country.

For months, speculations were rife that the new “bed partners” were eliciting backdoor favours with some members of PKR and Bersatu to allegedly launch a coup, which culminated with the events over the weekend and Mahathir’s resignation.

Anwar, who for 22 years after being sacked from the deputy prime minister’s post by Mahathir in 1998 over sodomy and graft allegations, became friends for convenience in the last general election.

On Monday, he defended Mahathir as having played no part in any attempt of working with the past regime or being behind any coup.

“I appealed to him on behalf of PKR and Pakatan Harapan that this treachery could be dealt with together, but he [Mahathir] was of a different mind. He thought that he should not be treated in such a manner and to be associated with those corrupt [persons],” he said.

However, the Pakatan alliance which commanded the majority with 115 seats in the last election now hangs in limbo with the departure of Bersatu, losing its majority in Parliament.