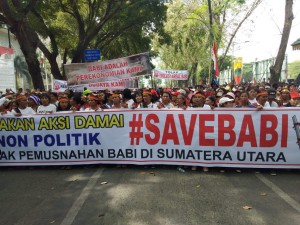 Hundreds of protestors stage a demonstration in front of the North Sumatra Legislative Council (DPRD) building in Medan on Monday to voice their objections to culling pigs in the province amid an African swine fever outbreak. (JP/Apriadi Gunawan)

The protestors, who identified themselves as members of the #SaveBabi (#SavePig) movement, said they did not want the pigs to be wiped because of the ASF outbreak, which has killed over 40,000 pigs in the province.

North Sumatra Governor Edy Rahmayadi said last month that he was considering a cull of all pigs in the province as a last-ditch effort to halt the spread of the virus.

The movement’s leader, Boasa Simanjuntak, said pigs played an important cultural and economic role for North Sumatra’s Batak people, adding that many politicians had obtained their seats by using funds from the sale of pigs.

“Don’t be hypocritical. We all know that many Batak people are successful because of pigs. Many people have become generals, officials and perhaps even DPRD members […] by selling pigs,” Boasa said during the demonstration.

He added that Jokowi should immediately take action to tackle the ASF outbreak, which has caused heavy economic losses among livestock farmers in the province.

“We demand that the government immediately intervene to overcome the outbreak, which has caused tens of thousands of pigs to die in North Sumatra.”

Hasudungan Siahaan, a protestor representing local community group Horas Bangso Batak, added that the movement was an expression of public unrest over the government’s plan to eradicate pigs in North Sumatra and had no political motives.

Responding to the rally, Victor Silaen, chairman of the DPRD’s Commission B, assured the protesters that pigs in the province would not be culled as they contribute to the province’s locally generated income (PAD).

Viktor said the North Sumatra DPRD had taken a number of steps to address the outbreak, including summoning regents from the 18 regencies affected by the virus, as well as related agency officials.

He also assured the public that it was safe to eat pork despite the virus.

“Go ahead and eat pork; no one who eats pork will contract the disease,” he said.

Separately, North Sumatra Food and Livestock Resilience Agency head Azhar Harahap said the provincial administration did not have sufficient funds to deal with the virus.

He explained that no specific funds could be allocated to overcome the outbreak and that his agency had requested funding assistance from the central government.

“We have asked the central government for Rp 46 billion [US$3.35 million] to help handle the swine fever outbreak here,” Azhar said during a meeting with the DPRD on Monday.

Azhar also asserted that culling all the pigs was not a solution as it would be in conflict with a 2012 government regulation on animal welfare, as well as the principles of the World Organization for Animal Health (OIE).

“The North Sumatra administration will not kill pigs because it will harm the community both economically and culturally,” he said.

There is no cure yet for ASF, he added, but the North Sumatra administration had formed a rapid reaction unit to take preventative measures such as spraying disinfectant and cleaning pig pens in order to ensure that healthy pigs do not get infected.

Azhar said the administration was also closely monitoring livestock movement between villages, subdistricts, districts, cities and provinces, and had banned the movement of pigs to and from North Sumatra to prevent the spread of the virus, steps that have already borne fruit.

“An average of 302  pigs per day have died from the virus in North Sumatra, which is the lowest amount compared to ASF outbreaks in other countries,” Azhar said, adding that the number of dead pigs totaled around 3.6 percent of the total 1.2 million pigs in North Sumatra

The Agriculture Ministry confirmed the existence of the ASF virus in 16 regencies in North Sumatra on Dec. 12 last year and reported the case to the OIE on Dec. 17. (syk)