SOUTH TANGERANG, Banten, Indonesia –  Sunita Bhagchandani walks like she owns the place, hair swinging side to side as she passes through peddlers and crowds of women carrying groceries, into her small jamu (traditional herbal drink) kiosk at the BSD Modern Market in South Tangerang, Banten.

The 27-year-old owner of Jamu Mbak Suni waves her hand, smiling as she greets her employees and some regular customers.

Suni nods knowingly as she drops her bag on a nearby chair and begins pouring jamu kunyit asam (tamarind and turmeric) into a glass.

At first glance, she really does not look like she belongs in the market, let alone resemble a jamu peddler, which is usually associated with middle-aged mbok (women) carrying baskets of jamu bottles on their backs.

Suni is noticeably stylish; her long hair dyed brown and curled at the ends, her uniform T-shirt tucked into a bright yellow midiskirt — not to mention her full glowing makeup perfectly contrasts with most market goers who wear worn-out shirts with hair tied up in buns.

“I really like selling at the market,” Suni recently told The Jakarta Post, her face beaming with excitement. “The market allows me to interact and be close to customers. We would sometimes even confide in each other. It feels like I’m with my own family.”

She began selling jamu in the BSD Modern Market in February this year, choosing to locate her first kiosk in a traditional market.

“I want jamu to return to its original place. Usually, when people look for jamu, where do they go? They go to markets or places around their houses.” 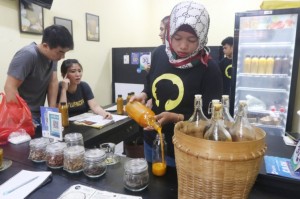 An employee of Jamu Mbak Suni in the BSD Modern Market in South Tangerang, Banten is pouring jamu for young customers on Tuesday. (JP/Dhoni Setiawan)

Her decision to open in the market was not originally met with good words from friends. She recalls them being confused and wondering: “Why would you open in a traditional market?” They were confused especially since people her age usually choose to work in prestigious offices and wear pretty outfits, whereas she wears T-shirts and has to leave for work at dawn every day.

However, recently, just 10 months after starting the business, Suni opened a new jamu-fusion cafe at Gading Serpong, also in South Tangerang. The Prasetya Mulya Business School graduate also has plans to further expand her business by opening another store in Bintaro next year and to offer franchises for various locations in Greater Jakarta.

Suni’s love for jamu is not one driven by business opportunity, but rather accumulated as she grew up.

“Back when I was young, there were still many jamu peddlers around my house. I used to drink jamu every morning and evening. When my mom bought jamu, I would also buy the sweeter ones,” Suni smiles as she recalls her childhood memories. “In middle school or high school, when jamu became harder to find, my mom often made jamu for ourselves.”

Her mother is also the one who inspired her to make her own jamu in the first place.

Born of an Indian father and a Surakarta mother, Suni experimented by creating both Indian and Indonesian traditional drinks, offering them to friends and relatives before establishing her online shop in 2015, under the brand DrinkSunny.

A few years later, Suni decided to focus only on jamu and began studying traditional herbs by reading books and browsing the internet. She even visited her mother’s hometown of Surakarta and also Yogyakarta for three weeks just to learn about creating jamu using only Earth-grown ingredients.

Her curiosity along with extensive learning efforts result in a broad knowledge of the traditional herbs and spices, also its benefits and side effects.

“One of the misconceptions people have about jamu is that it causes kidney diseases. I usually answered ‘Yes, if the jamu you’re drinking contains chemicals. Yes, if you don’t drink enough water.’ I learned all that when I was in Surakarta because I asked the same thing too. Back then I, too, knew nothing about jamu.”

Whenever a customer comes explaining their symptoms or health issues, Suni would suggest a particular drink, or mix certain ingredients to help them regain fitness.

“The one thing that makes me very happy is when customers give us good reviews or testimonies like, ‘I had been coughing for days. I drank medicines repeatedly but wasn’t healed. As soon as I drank your jamu, I stopped coughing within a day.’

“That is priceless to me because my goal is to be an alternative way to heal people, to make people healthy,” Suni explains, once in a while glancing at a husband-and-wife pair, regular customers she had befriended. 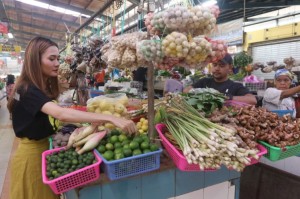 Santoso, 63, and his wife Jeanne, 62, have been drinking Suni’s jamu every day for the past four months. The two usually stop by and chat with Suni after grocery shopping at the market.

“My favorite is pahitan [a bitter drink made of green chireta] and beras kencur [mixed rice and herbal tea],” Santoso says as his wife takes a sip from her cup. “It has good benefits and is very healthy.”

The businessman remarks that drinking jamu every day has made his body significantly fitter. When asked why he chooses Suni’s jamu over others, he explained that he has seen the ingredients Suni uses for her jamu, everything fresh and processed naturally.

Jeanne is also undeniably supportive of Suni, offering to purchase one of Jamu Mbak Suni’s franchises and teasingly matchmaking her with some acquaintances.

Suni simply laughs the latter offer off. At the moment, she is focused on business and exploring new fusion menus for the Gading Serpong cafe.

“The inspiration came to me when I was talking to the customers, especially the youngsters. When my customers come with their children, most of them don’t want to drink jamu, because jamu is old-fashioned and bitter. From there, I thought about ways to make jamu more modern and tasty, so that when these youngsters drink jamu, they are proud as well,” Suni shares.

“I explored all these recipes by myself, trial and error, and then have many people taste them first.”

Suni is determined to shift people’s misconceptions about jamu and to preserve this favorite traditional drink of hers for years to come.

“I really want jamu to be perceived as cool and appetizing, for it to be accepted by all, from young kids to seniors, from people with low earnings to high earnings.” (kes)