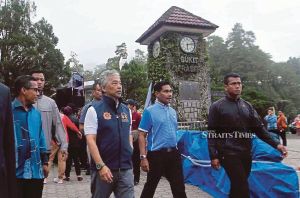 KUANTAN: Fraser’s Hill is home to Southeast Asia’s longest running International Bird Race event. It also has one of the oldest golf courses in the country.

State Tourism, Environment, Plantation and Biotechnology Committee chairman Datuk Seri Mohd Sharkar Shamsuddin said the bird race, aimed at preserving nature and promote Fraser’s Hill as a bird sanctuary, had been an annual event in the state’s tourism calendar since 1988.

“Bird lovers, young and old, from around the world will gather at Fraser’s Hill. The highland has been also designated as an ‘Important Bird Area’ as it has a number of highly sought-after migratory birds.

“The nine-hole golf course situated right at the centre of the resort near the clock tower has been around since the 1920s. It offers challenging sections and surrounded by scenic green forest,” he told New Sunday Times.

Sharkar said the resort, which was one of the last remaining hill stations in the country, had managed to retain its old charm.

The 100 years anniversary celebration would mark a new chapter for Fraser’s Hill.

“We are refurbishing the old buildings. Works are being done slowly and carefully so as not to harm the environment. The resort is an icon town. There is no other place like it in Malaysia.

“Activities planned in conjunction with the Fraser’s Hill 100 years anniversary is part of preparations for Visit Malaysia 2020. The celebration here is a prelude before the arrival of tourists next year,” he added.

“Some had worked here in the past, others had parents who had worked here. They visited the resort and stayed for a few days. Many still remember everything about Fraser’s Hill as it has not changed much. Some even make it a point to return here every year.

“The police station and post office have been around since the British colonial era. Most of the roads sport the British name. For example Lady Guillemard Road (near Shahzan Inn), Lady Maxwell Road and Allan’s Water (a small lake at the resort). Everything remains pristine as the state government does not allow heavy tourism activities or any developments in the area.”

Idros said besides being a favourite spot for extreme mountain bikers or leisure cyclists, Fraser’s Hill also attracts day-trippers who wished to drive up and enjoy the cool climate.

Meanwhile, a tourism council spokesman said in conjunction with the 100th anniversary celebrations, the Pahang and Selangor tourism boards would team up to host events throughout the year at Fraser’s Hill.

“On Sunday (today), several activities, including, hiking, cycling and fun run, involving 100 participants, will be held to mark the 100th anniversary. Yang di-Pertuan Agong Al-Sultan Abdullah Ri’ayatuddin Al-Mustafa Billah Shah is scheduled to participate in a golf event while Raja Permaisuri Agong, Tunku Azizah Aminah Maimunah Iskandariah, will visit the Bukit Fraser Community Library,” he said, adding that works were carried out around the clock to ensure everything was in place ahead of the event.

Located 1,420m above sea level, the hill was named after a Scottish explorer Louis James Fraser, who set up a tin-ore trading post in the 1890s. He mysteriously disappeared in 1915.

Two years later, the Bishop of Singapore rediscovered the highland while searching for Fraser and proposed the area to be developed into a hill station. A golf course is built on the existing tin mine area.

In the past, vehicles had to pass a narrow single winding carriageway, which only allowed for one-way traffic.

There was a schedule for vehicles to travel to the peak and downwards to Gap (the main road to the resort).

However, a new stretch that passes in front of SJK(T) Fraser Hill was opened.

Motorists can now drive up through the old stretch and come down on the new road. 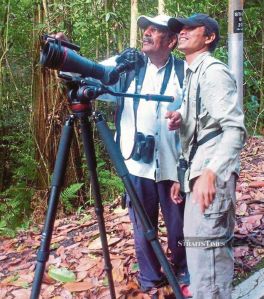 Sanadure (left) or fondly known as Durai Birdman or K.S Durai, is one of the country’s top birding guides. PIC BY T.N. ALAGESH

KUANTAN: Holding a pair of binoculars around his neck, K. Sanadure, 60, slowly makes his way into some bushes before lifting his hands toward the direction of a huge tree.

He lifts his binoculars to his eyes and focuses towards the direction of the tree while the group accompanying him begin to adjust the zoom of their digital cameras as they try to have a closer view of a colourful species bird chirping on the tree branch. Minutes later, there are smiles on the group’s faces as they put away their cameras, binoculars and notebooks before some of them approached Sanadure and thanked him for bringing them there.

Sanadure, or fondly known as Durai Birdman or K.S Durai, is one of the country’s top birding guides, who is no stranger to the bird-watching community, both locally and abroad.

Described as someone with an eagle eye, he has been taking people bird-watching in Fraser’s Hill for more than 35 years and has in-depth knowledge about birds, especially migratory ones.

Sanadure, who previously served the Fraser’s Hill Development Corporation and World Wide Fund (WWF), said he started to have a deep interest in birds since he was young, and serving the WWF gave him exposure to a bigger stage.

“I conducted a lot of research and studies about birds, and noticed that Fraser’s Hill is a favourite habitat for migratory birds. The first Fraser’s Hill bird race was introduced in 1988 and continues until today.

“Every year during the migration season, oriental honey buzzards, Siberian thrushes and yellow-rumped flycatchers are among the birds that can be spotted here between late September and April.

“These birds are from Siberia and China. For bird-watchers, they will never miss the opportunity to come over and witness the presence of the birds.”

Sanadure said there were two types of bird watchers. Those from Singapore, Thailand, China and Hong Kong preferred to capture pictures of the birds, while those from Europe would come down to have a closer glimpse and study the birds.

“Fraser’s Hill has continuously received tourists, including bird watchers. I have a friend in the United Kingdom, who helps to arrange tourists to visit the resort.

“During the annual bird race, we receive hundreds of participants from all over the world,” said Sanadure, who is also a member of the Oriental Bird Club which helps to conserve Asian birds.

RAUB: BORN and raised in Fraser’s Hill near here, O. Sevegen@Segar is among the few who grew up witnessing the transformation at the highland.

The 52-year-old, who is the eighth out of nine siblings, was born at the resort’s health clinic. His parents worked as labourers at the highland.

Sevegen completed his primary education at SJK(T) Bukit Fraser before moving to Kuala Kubu Baru in Selangor to complete his secondary education.

Upon completing his studies in 1983, he secured a job with the Fraser’s Hill Development Corporation, which manages the hill resort before joining the Raub District Council. The father of three is now in charge of the Fraser’s Hill Golf Club counter.

Sevegen said in terms of major developments, nothing much had changed at Fraser’s Hill over the decades as the place, dubbed “Little England of Malaysia” for its pleasantly cool climate, remains an all-time favourite for nature lovers and bird watchers from around the globe.

“It’s cold at night and one has to wear thick clothing when walking outside. Some of the colonial-style bungalows, which were built during the British colonial era, even have a fireplace to keep visitors warm and cosy.

“I remember when the Shahzan Inn Hotel was built in 1974, the residents here were excited. It has since become one of the famous landmarks here. There used to be a petrol pump near the clock tower and roundabout,” he told the New Straits Times.

Sevegen said he was among the few Fraser’s Hill “loyalists” at the highland resort as many of his former colleagues and friends had retired and moved out.

“There are about 500 people living in Fraser’s Hill. When I was schooling, the population was bigger. However, over the years, some moved to live with their children at nearby towns like Raub and Kuala Kubu Baru. Many of them would come back for a short stay or to attend functions,” he added.

Sevegen said the hill resort continued to receive a steady stream of visitors, including foreigners, especially over the weekends and public holidays.

“Some private companies have (built) their own bungalow units here, so their staff would take the opportunity to stay and explore Fraser’s Hill. There are also those who live in Kuala Lumpur, Johor Baru and Singapore, who purchased apartment units here as their holiday homes, and come over the weekends. This place is never short of visitors.

“These days, we even have a lot of high-powered bikers and cycling enthusiasts negotiating the bends and riding up, especially during the weekends. They will spend several hours here, including having their meals before leaving,” he said.

Sevegen described the 100 years anniversary celebration at the hill resort this weekend as something special.

He said many people, especially the younger generation, might not be aware that the resort had existed since 1919.

He added that only less than 10 per cent of Fraser’s Hill had been developed while the remaining areas remained untouched.

Over-development could ruin everything, he said.

“The move (by the state government) was a bold one. We can do without anymore new resorts or premises here. I believe people are content with what’s available. No one is complaining despite shortcomings, such as the traffic congestion during weekends.

“However, I hope the state government will consider reintroducing the bus services to Fraser’s Hill as it is costly to book a taxi to go to the nearest town.

“The Pahang Lin Siong bus used to service the route between Raub-Fraser’s Hill-Kuala Lumpur but has since stopped. It takes about an hour to reach either Raub or Kuala Kubu Baru.”

Khairuddin said most of the elderly folks who once worked at Fraser’s Hill were slowly moving out to live with their children who have secured jobs and have families elsewhere.

“Those living here are mostly civil servants and staff of the hotels and resorts. The are not many job opportunities here. There are only two schools here — SK Bukit Fraser and SJK(T) Bukit Fraser. The SJK(C) Bukit Fraser was relocated to Kuala Langat, Selangor this year due to low enrolment. A secondary school at the highland can lure more people here.”