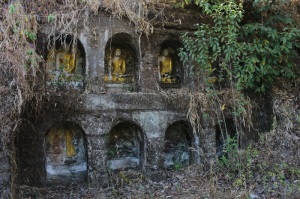 Buddha statues and images of creatures from legends carved into stone walls at the site of what is speculated to be an ancient Pyu city in Irrawaddy Division. (Photo: Salai Thant Zin / The Irrawaddy

Most people know little of Myanmar’s ancient Pyu people but for the ruins of their civilization at Sri Ksetra, Halin and Beikthano in central Myanmar—the first sites in the country to receive UNESCO World Heritage status.

Now another ancient city in Lower Myanmar’s Irrawaddy Delta is believed to be as old as the Pyu sites, the size of which would have been greater than the old royal capital of Mandalay.

The laterite stone city covers an area of eight square miles and is located near Taung Zin Village in Ingapu Township, Irrawaddy Division. About three miles into the village lies the site, believed to have been built more than 2,300 years ago during the Pyu period.

“As it is a remote place, only monks went there to meditate in the past. In 2008, at the instruction of my senior monks, I started to live in a hermitage here, and conserve the ancient religious buildings and cultural heritage of the city,” said Pinna Siri, a monk at the on-site Kyet Pyin Monastery.

With the help of people from nearby villages, Pinna Siri cleared the area of brush and in 2009 he invited historian Phone Tint Kyaw to observe the city’s ruins.

Phone Tint Kyaw came with a team, and after studying alphabets, laterite structures and Buddha images there, he concluded that they might be the works of the Pyu, one of Myanmar’s most ancient civilizations.

It was the presence of Brahmi-based script that tipped him off; Phone Tint Kyaw explained that the writing system found at the site is the same as those documented in three other Pyu cities, as well as in Pegu and Danyawaddy in Arakan State. The alphabet was used from the sixth century until the third century B.C.

“The Brahmi script disappeared as the empire of King Ashoka collapsed after he died,” said Phone Tint Kyaw, referring to the Indian emperor who passed away in 232 B.C.

His conclusion is further supported by carvings found at a stupa identical in style to those found at a religious site in Shwe Taung town in Pegu Division.

In addition, bricks in the steps were laid vertically in the city, in the architectural fashion of Pyu period.

Lost City by the Sea

There were 22 Pyu city-states which existed between the sixth and third centuries B.C. One is described as “Pinle Pyu,” which translates to “Sea Pyu.” Its location was previously unknown, but Phone Tint Kyaw speculates that the ancient city in Ingapu Township might be Sea Pyu.

According to the administrative structure of Pyu period, only the monarchs could build large cities; feudal lords were only allowed to build cities half or one-third of the size of a royal city.

The city in Ingapu Township was built on a mountain ridge over 100 feet high, to a backdrop of the Arakanese mountain range. The town was designed around pagodas, stupas and water sources. Stone walls were constructed on the left and right sides of city, while vast plains and smaller villages lay to the east.

“They built the city systematically. There were sentry boxes on the ridges on the left and right sides of the city and the entrance was built in the middle. So, there was only one entrance for merchants, envoys or enemies to get into the town,” said Phone Tint Kyaw.

As it covers an area of eight square miles, the city in Ingapu is one of the biggest Pyu settlements after Sri Ksetra in Pegu Division.

Previously, the oldest ruins found in Irrawaddy Division could be dated back to the Ava period, which began in the 1300s. The discovery of a Pyu city which predates the Ava period would have implications for the history not only of the Irrawaddy Delta but also of Myanmar.

Phone Tint Kyaw has called for systematic excavation of the Ingapu site and Pinna Siri, the Kyet Pyin Monastery monk, has called on the government to protect the area. He said that that some people who do not know the historical value of the ancient city have used the laterite blocks to pave roads and have removed ancient buildings to make way for cultivation.

“It is important that the government immediately takes care of the old city as an ancient cultural heritage zone,” said Pinna Siri. “Even now, a company is reclaiming the land at what was the site of an elephant stockade in the ancient city and it has been destroyed.”

“I am doing as much as I can, but government intervention is needed right now,” he added. 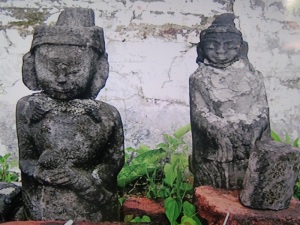 Carvings at the site in Ingapu Township whose style is identical to statues at a religious site in Shwe Taung, Pegu Division. (Photo: Salai Thant Zin / The Irrawaddy)

At present, there is only one city designated for conservation by the Ministry of Culture as in Irrawaddy Division—Myaungmya.

The Naypyidaw Department of Archaeology, National Museums and Libraries studied the Ingapu site in 2013, but have not yet taken measures to designate the ancient city as a cultural heritage site.

“Personnel from the Naypyidaw headquarters inspected the old Ingapu city. So far, we have not yet received any instructions for the ancient city,” said Thida Win, assistant director of Irrawaddy Division’s Department of Archaeology, National Museums and Libraries.

In the meantime, Pinna Siri is collecting artifacts discovered by locals at the site.

Carvings at the site in Ingapu Township whose style is identical to statues at a religious site in Shwe Taung, Pegu Division. (Photo: Salai Thant Zin / The Irrawaddy)

“Locals find earrings, pipes and broken pots while farming. I have asked them to donate those things to me. So far, I have kept around 20 bricks and old pipes,” he said.

Though there are over 350 ancient cities documented in Myanmar, the Department of Archaeology, National Museums and Libraries has only excavated materials from around ten of them. Only through the systematic excavation of these old cities will a standardized history of Myanmar be able to be compiled, said Phone Tint Kyaw.

“It is important for a country to have standardized history. Even our neighbor, Thailand, has compiled a standardized history. To write [this kind of] history, we need to systematically excavate and study the old cities. I believe the old Ingapu city would have played a part in the history of our country,” he said.