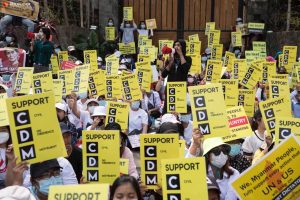 Anti-regime protesters in Yangon in February call on civil servants to join the civil disobedience movement. / The Irrawaddy

Myanmar’s civil disobedience movement (CDM) against the military regime has been nominated for the Nobel Peace Prize for 2022 by six academics at the University of Oslo in Norway.

It is the latest attempt to highlight Myanmar’s fight for democracy since the Feb. 1 coup.

The nomination is recognition of the CDM’s role “in forging a positive agenda for substantive democracy and peace”, said the proposal to the Nobel committee.

The CDM members “are risking arrests, torture and death, yet have chosen to fight for their freedom through labor strikes, peaceful assembly and non-violent resistance”, said Professor Kristian Stokke, one of the nominators.

The nomination said: “[The CDM] strives to create a united stand against the military’s divide and rule tactics and for federal democracy. If successful, this holds the potential of ending Myanmar’s long legacy of direct and indirect military rule and intrastate armed conflicts.”

Ambassadors and other diplomats, including the ambassadors to the United Nations, United States and United Kingdom joined the CDM and are supporting the elected lawmaker’s Committee Representing the Pyidaungsu Hluttaw (Union Parliament) or CRPH.

Protesters have called on civil servants to stop working and join the CDM.

The CDM is also being supported by private banks and businesses.

In response, the military regime has carried out brutal crackdowns on peaceful protesters and evicted striking staff from government accommodation.

More than 270 people have been killed by Thursday, largely by firing at protesters.

Dr. Sasa, the CRPH-appointed special envoy to the UN, said on Friday that the Nobel nomination is “a wonderful opportunity” for the people of Myanmar.

“It will give new hope to the people of Myanmar and bring to the forefront their suffering and pain as they stand for justice, freedom and peace, despite the oppressive and brutal actions of the military”, said Dr. Sasa.

The CRPH has been urging the international community not to recognize the regime.

Dr. Sasa said the nomination showed the CDM is winning in its fight against the repressive regime, which has committed “barbaric atrocities and crimes against humanity with impunity”. He said the CDM has captured the world’s imagination with its “peaceful resistance to the rule of the men with guns”.

By acknowledging the striking civil servants’ bravery and determination, the nomination showed that the world stood with the people’s struggle for freedom and a better future.