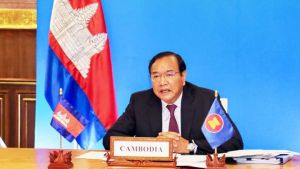 The ASEAN Foreign Affairs Ministers concurred on the urgency to intensify ASEAN’s joint efforts to successfully implement the agreed initiatives and measures to respond to the Covid-19 pandemic and recover from its socio-economic impact, according to a press release.

At the invitation of his Bruneian counterpart Erywan Pehin Yusof, Minister of Foreign Affairs and International Cooperation Prak Sokhonn took part in an informal ASEAN ministerial meeting held on March 2 via video link.

According to the foreign affairs ministry’s press release, the ministers had an extensive in-depth “heart-to-heart” discussion on the ASEAN’s progress, how to strengthen and expand the group’s external relations, and the need to consolidate centrality in the evolving regional architecture.

“Ministers also concurred on the urgency to intensify the ASEAN’s joint efforts to successfully implement the agreed initiatives and measures to respond to the COVID-19 pandemic and recover from its socio-economic impact,” the press release stated.

ASEAN ministers also exchanged views on regional and international issues of common interest and concern, including current developments in Myanmar.

Cambodian Institute for Democracy’s president Pa Chanroeun said that ASEAN has a common motto: one community, one destiny. But this motto is just rhetoric, with the group not yet implementing its vision and motto.

“In connection with caring and helping each other during difficult times, including the world as well the region facing the Covid-19 pandemic and the political unrest in Myanmar [Burma], ASEAN countries adhere to the principle of non-interference in the internal affairs of its members,” Chanroeun said.

Chanroeun believes that violence and human rights abuses and the democratic process in the region should be priority issues for the group because all members are signatories to the Universal Declaration of Human Rights.

Kin Phea, the director of the Royal Academy of Cambodia’s International Relations Institute, said that ASEAN countries are facing many issues in the region and the world, especially Covid-19 crisis.

He added Cambodia’s standpoint is to adhere to the principles of multilateralism, because this issue cannot be solved by a single country and requires joint cooperation.

“Covid-19 and economic recovery, in addition to relying on the principles of multilateralism, requires Cambodia to put in place its own measures, such as social and economic protection policies, health measures and public well-being is to be promoted and continued.” Phea said.

Phea said in connection to the current situation in Myanmar, Cambodia still adheres to the principle of non-interference in the internal affairs of member countries. But even wanting to be involved or not, the solution requires one common voice.