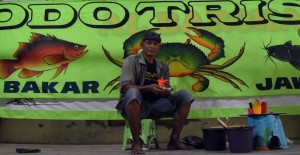 YOGYAKARTA  – A middle-aged man, with a flat cap on his head and a collared shirt, sat quietly as his eyes stared down the 12-square-meter banner in front of him.

There were only thin sketches of chickens, gourami fish and other drawings of animals recognizable on the banners of a pecel lele warung (deep-fried catfish food stall).

Pecel lele is of course the popular Indonesian dish that originated in Lamongan, East Java, but now can be had anywhere across the country.

Many times he tried to land his brush to embolden the sketch lines, yet over and over again he refrained from doing so – inspiration was not with him today.

His name is Teguh Wahono, the unsung maestro who created the iconic pecel lele banner, whose style is so ubiquitous that it is difficult to think of any other drawing style warung banners would employ.