Ibtisem Ben Nassib (R) with her sister, Ismahan Khan and the group of Orang Asli they met in the jungles of Pahang. (Ibtisem pic)

PETALING JAYA: More than 1,700 Orang Asli families in Jerantut and Temerloh, Pahang, received care packs courtesy of the “Give with Ikhlas” digital donation initiative, organised by IKHLAS to foster the spirit of giving during Ramadan.

FMT spoke to Malaysian filmmaker Ibtisem Ben Nassib, who documented her journey into the deep jungles of Pahang to meet with the Orang Asli living there.

“The initiative I am with, ‘Give with Ikhlas’ received a request from the Yang di-Pertuan Agong, Sultan of Pahang Abdullah Ri’ayatuddin Al-Mustafa Billah Shah, whose words of wisdom inspired and encouraged us to help the Orang Asli communities.

“My team and I felt it was a wonderful gesture and, as a passionate filmmaker, I was thrilled and grateful for the chance to help,” said Ibtisem.

It was no easy feat however, as the round trip took the team about five hours in total.

They had to first take a helicopter to get as close to the villages as possible and, since there are no roads in the jungle, they hopped on to four-wheel drives to traverse the rough and challenging dirt paths to the river.

This was followed by a long boat ride and more trekking before they caught sight of the first Orang Asli villages.

The journey to reach the Orang Asli villages was made possible by helicopter, four-wheel drives and boats. ( Ibtisem pic)

Ibtisem, a recent winner of the HBO Asia Invisible Stories Film Competition for her standout documentary, “Ali”, was thrilled to meet the Orang Asli, whom she said were rather shy people.

“Despite their shyness, I felt a beautiful warmth in their presence. However, I wish I had more time to get to know them better. Nevertheless, every moment spent with them will be cherished.”

A shy Orang Asli sitting with her provisions. (Ibtisem pic)

Ibtisem said her favourite moment of the entire journey was seeing the huge smiles on their faces when they received the food packages.

She said however, that since she and her team were on such a tight schedule due to the long journey to and from the villages, there was hardly any time to shoot the kind of footage she would have liked to document their visit thoroughly. 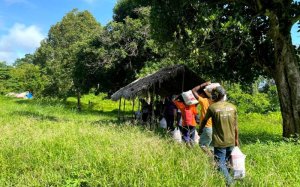 According to her, the Orang Asli here live in pretty poor conditions. Their huts are practically threadbare and they do keep a lot of animals around them like birds, monkeys and chickens.

Fascinated by how they survive on so little, deep in the jungles of Pahang, Ibtisem says she wants to return to make another documentary on the Orang Asli there, this time more in-depth and insightful to capture both the true hardship and happy moments of their way of life.