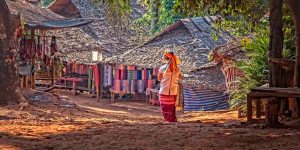 Prof. Dr. Narumon Pinyosinwat, has assured the public that the government is looking after people of all ethnic hill tribes groups in Thailand. Saying no one ethnic group or person will be overlooked.

Dr. Narumon said the ethnic issue should not be raised to cause disunity in the country. Even more she expressed confidence that everyone loves the Thailand and wants to live together peacefully.  She said the government is committed to protecting and looking after all ethnic hill tribes groups. Above all according to international humanitarian law and humanitarian principles.

The Hill Tribes are people who migrated to Thailand after being pushed out of their native homes in Tibet, Burma and China by civil war and political pressures. Each of the ethnic groups has its own distinct language, heritage, clothing, religion and culture.

There are 5 different hill tribes in Chiang Rai alone ans they all live peacefully together in several settlements. The 5 different tribes are the Palong Long Necks (also known as the Karen Long Necks), Kayor, Akha, Lahu, and Lu Mien.

The government’s policy is to protect the rights and status of ethnic people in Thailand.

Several cabinet resolutions are as follows:

1) On December 7, 2010, the cabinet resolved that the legal status of ethnic minorities, who were born outside Thailand and have registered with government, is a resident alien. Even more they have the right to request Thai citizenship.

2) On December 7, 2016, the cabinet resolved that children of ethnic hill tribes minorities born in Thailand can request Thai citizenship. The Ministry of the Interior also authorized district chiefs to sign an approval. If their children are over 18 years of age, provincial governors will endorse them.

3) On July 5, 2005, the cabinet resolved that Thai and foreign children who do not have proper registration documents can pursue compulsory education. Also with financial support from the government each year.

4) On March 23, 2010 and April 20, 2015, the cabinet resolved that ethnic minorities. Whom have registered with the government, can receive health services from medical personnel. Also with financial support from the government annually.

Most noteworthy since 1992, some 258,000 ethnic hill tribes people have been granted Thai nationality.

Prof. Dr. Narumon said, this New Year is a time for everyone to be happy and stay with their family members. Please don’t raise issues that may cause conflict. This New Year, the government is ready to look after all people. Above all so they can get home safely and be with the families.

Agencies have also been instructed to facilitate the public to the best of their ability.