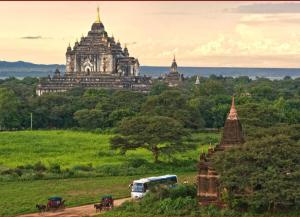 Bagan has been named as a UNESCO World Heritage Site, a quarter of a century after the ancient capital was first nominated.

The recognition by the UN’s cultural body will serve to boost demand from both Western and Asian markets, the tourism industry says. But meeting conservation pledges and effective local governance will be critical for the area’s future.

“Bagan is a destination which is already popular among tourists and, with this [UNESCO] title, it will further attract visitors from abroad,” commented U Aung Htun Lin, Myanmar Tourist Guides Association chair.

However historian and Yangon Heritage Trust chair Thant Myint U suggested that tourism should be part of Bagan’s future but not the driving force.

“Bagan is not only a place of sublime beauty, but a place of tremendous historic importance, that was fuelled by an energetic multiculturalism and an openness to the outside world, a place from which we can still draw lessons and inspiration,” he told The Myanmar Times.

There is a need for proper conservation and a move of any commercial activities away from the archaeological zone, he added.

“But it’s equally important to make sure that Bagan remains accessible to ordinary Burmese people and not become a tourist playground. The Burmese student and pilgrim, not the well-heeled tourist, should be at the centre of planning.”

The proposal to list Bagan was approved by the UNESCO World Heritage Committee at a meeting in  Baku, Azerbaijan, on Saturday. This marks Myanmar’s second entry to the list after World Heritage Status was granted to the ancient Pyu cities of Sri Ksetra, Halin and Beikthano in 2014.

In 1995, the then-military junta nominated Bagan but the application was rejected.

UNESCO’s recognition has the potential to energise Myanmar’s lacklustre travel and hospitality sector. Tourist numbers since 2017, particularly from Europe, have fallen as a result of the northern Rakhine crisis and bad tourism policies. The authorities limited the maximum days tourists can spend in Bagan from five to three last year for no clear reason.

Singapore-listed Memories Group operates a hot-air balloon business in Bagan. CEO Cyrus Pun said Myanmar “should not take it for granted” that the UNESCO status alone will revive the whole tourism landscape.

“There is still a lot to be done to make Bagan and Myanmar fulfil its full potential as a world-class destination, for example the right infrastructure to make it easier to travel around Myanmar, promoting more sustainable tourism, policy directions and caring for the local communities.

“We are already moving in the right direction in these areas which is encouraging.” 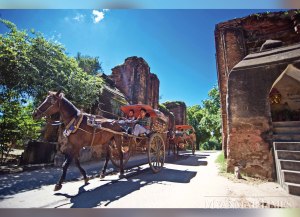 Tourists take a horse cart through a gate in the walls of the old city of Bagan. Photo: Kaung Htet/The Myanmar Times

The ancient city has more than 3500 surviving stupas, temples, monasteries, fortifications and other monuments, according to the Department of Archaeology and National Museums. It also has archaeological sites and the remains of an ancient water-management system. Many structures were damaged in the 2016 earthquake.

The Myanmar government has pledged to remove all hotels from the existing archaeological sites to a dedicated hotel zone by 2028. Fulfilling this promise, and meeting other conservation targets, will be a key criterion for Bagan to sustain its World Heritage status.

Bertie Lawson of Yangon-based boutique travel agency Sampan Travel echoed the point about relocating the hotels away from the site. “Looking forward, it is important that a long-term view of tourism and national heritage is adopted and mistakes of the past are not repeated.”

Ko Moe Wai Yan Myint, general manager of Gracious Bagan tour operator, urged the authorities to follow UNESCO’s rules and advice on conservation in order to preserve Bagan’s status. “Because this is our people’s heritage, we have all the more responsibility to preserve the recognition.”

The construction of hotels in the archaeological zone had to be tackled, and the problem of both commercial activities and local business not abiding by regulations.

People need to be educated about preserving Myanmar’s cultural heritage, he added. “We need to tell them not to litter or write on the walls, which could destroy the traditional writings.”

Ko Moe Wai Yan Myint said local businesses should be more welcoming to Chinese tourists and learn their language. “Just like what Bogyoke Aung San said about learning English to fight the British, we have to learn Chinese. We need to have a grasp of their language so we resolve the problems we encounter with them,” he said, referring to perceptions of unruly behaviour among some visitors.

Bagan’s transformation into Myanmar’s biggest draw has not been without challenges. In 2012, a protest against a tourism project was held by the community in Nyaung Oo township, who objected to the plans for hotels and restaurants in the cultural heritage site.

“The key challenges with an ever increasing tourism numbers in Bagan are to do with managing effectively the impact on the environment, and also ensuring that the local communities can share the benefits of this growth in the long term,” commented Mr Pun.

Tourism has led to increased economic opportunities for Bagan’s communities and the emergence of small businesses, such as bicycle rentals and small lacquerware shops, creating jobs and increasing demand for local goods and services. 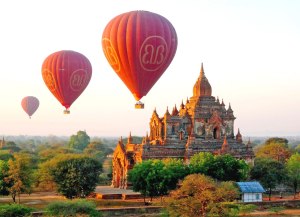 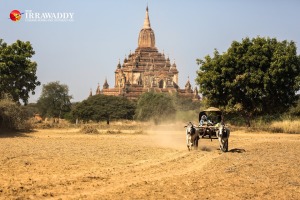 But small local businesses struggle to compete with companies with greater access to capital, according to a 2015 sector-wide assessment on tourism by the Myanmar Centre for Responsible Business. For example, horse-cart drivers in Bagan are losing out to electric bikes and are forced to search for alternative livelihoods.

In one village, 80 percent of villagers made and sold bricks for a living. The authorities prohibited the baking of bricks inside the archaeological zone because of damage to the landscape. The policy had a direct impact of their livelihoods.

The study warned that Bagan and other flagship sites were already under environmental and social pressure from the effects of tourism. This pressure posed an impact on the livelihoods of local communities and long-term viability of these places as tourism destinations.

“The next location, according to experts, to be added to UNESCO is Mrauk-U, the third entry from Myanmar. As we all know, Mrauk-U is in Rakhine and thus facing some difficulties,” U Aung Htun Lin said.