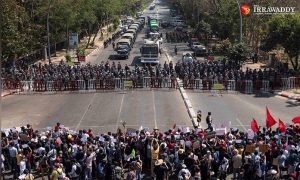 Riot police man barricades while soldiers stand at the ready behind them, as a large crowd of anti-coup protesters gathers in Yangon on Tuesday. / The Irrawaddy

US President Joe Biden discussed the situation in Myanmar with Indian Prime Minister Narendra Modi in a phone call on Monday.

The two leaders “resolved that the rule of law and the democratic process must be upheld in Burma,” according to a White House readout of their call.

In other international reaction, New Zealand Prime Minister Jacinda Ardern said her government would suspend all high-level political and military contact with Myanmar. The country will also impose a travel ban on Myanmar military leaders and ensure that any aid to the country excludes projects that could benefit the military government.