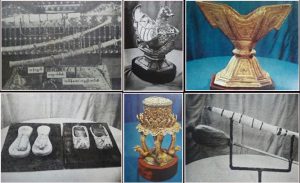 Some of the Myanmar royal treasures returned by Britain.

YANGON—On this day in 1964, the British government returned more than 140 pieces of royal jewelry and other items from among the many valuables that British colonizers looted from the Mandalay Palace of King Thibaw following their annexation of Upper Burma in 1885.

The British government returned the valuables at the request of General Ne Win, who was on a two-month visit to London at the time.

The general arranged to have the historic artefacts sent back in two batches, but personally brought one item back with him—the “sanlyak”, a four-edged dagger that was one of five articles of Burmese coronation regalia. It is believed to date back to King Alaungpaya, who founded the Konbaung Dynasty in the mid-18th century.

Upon his return to Myanmar, the general allowed invited journalists to closely inspect the sanlyak. Reporters were told it would be kept at the office of the head of the Revolutionary Council.

Eventually the sanlyak joined the other royal articles that had been shipped back to Myanmar on display at the National Museum in Yangon.

After Myanmar gained independence from the British in 1948, Lord Mountbatten, the governor-general of India, returned the Thihathana Palin—the Lion Throne—to Myanmar. The throne, which represents Myanmar’s sovereignty, is also on display at the National Museum.

However, many of the articles that the British seized from Myanmar after dethroning King Thibaw remain in England, along with items seized from other colonies.