Over 7,000 Apply to Run in Myanmar’s November Election 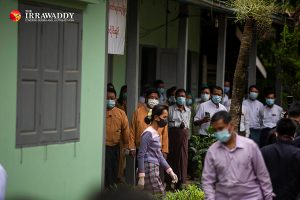 YANGON—A total of 7,005 people across the country have applied to run in Myanmar’s November election, an increase of over 800 applicants compared to the 2015 general election.

According to regional election sub-commissions, a total of 955 people registered in Yangon Region, 544 in Mandalay Region, 685 in Sagaing Region, 480 in Magwe Region, 535 in Bago Region, 544 in Ayeyarwady Region, 273 in Tanintharyi Region and 76 in Naypyitaw.

Region and state election sub-commissions are in the process of checking whether the applicants meet eligibility criteria. The process is due to be completed next Monday, after which the commissions will announce which candidates are qualified to run in the November election.

According to the Union Election Commission (UEC), a total of 6,189 people put themselves forward to run in the 2015 general election, 39 of whom withdrew their applications.

After assessing them to determine eligibility, the UEC rejected 75 applications in 2015—16 for the Lower House, 21 for the Upper House and 38 for region and state parliaments.

The general election is scheduled for Nov. 8. The UEC has recently dissolved two of the 95 existing political parties.