A woman sunbathing on the track near the West Flood Canal in Tanah Abang. (JG Photo/Yudha Baskoro)

JAKARTA – Residents of Petamburan and Tanah Abang in Central Jakarta, a densely populated area divided by the city’s Commuter Line train’s track, have a new hobby: sunbathing early in the morning. They believe the practice improves the body’s immune system and helps protect them from coronavirus.

An old lady enjoying a spot of the sun in front of her home near the West Flood Canal on Friday morning screams “Die, you virus! Go away, corona!” as she does her light exercises.

A family sunbathes together outside their home in Petamburan. (JG Photo/Yudha Baskoro)

Other residents lift weights, play badminton or sit on the track chatting with their neighbors. Every five minutes, a train would pass, sending them scampering back to their dark houses. 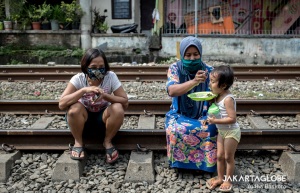 The scene this morning – the first day of Jakarta under ‘large-scale social restriction’ – in Petamburan. (JG Photo/Yudha Baskoro)