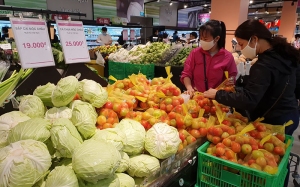 Veggies are abundant at an Aeon supermarket in Long Bien district. Photo: Hanoimoi

HANOI, Vietnam – The retail network in Hanoi can supply sufficient necessities for locals in any case, even in the event of a drastic surge in demand.

Foodstuffs have been filled up on shelves at supermarkets and convenience stores and also abundant at wet markets in Hanoi on Sunday after locals rushed to buy in necessities foll owing the first coronavirus infection case confirmed in the city.

At a Vinmart supermarket in Hai Ba Trung district, shelves are full of foodstuffs, especially rice, vegetables and meat, while prices remain unchanged from previous day. Any item that is seen running out is added in a timely manner, a staff was quoted by Hanoimoi as saying.

Meanwhile, pork meat is abundant at stands in wet markets. A pork vendor in Mai Dong market said that prices turned back to normal today while sales were sluggish.

On Saturday, pork prices shot up and meat, seafood quickly ran out in early morning. Prices of pork, the most common source of protein in the country, surged to more than VND300,000 ($12.93) per kilogram.

Speaking at a Ministry of Industry and Trade meeting on Saturday afternoon, Tran Thi Phuong Lan, deputy director of Hanoi’s Department of Industry and Trade, asserted that the retail network in the city can supply sufficient necessities for locals in any case, even in the event of a drastic surge in demand.

Nguyen Thai Dung, CEO of BRG Retail, said his chain made the same move and pledged not to raise prices of the demanded goods.

Minister of Industry and Trade Tran Tuan Anh asked retailers to ensure supplies and not to allow drastic price hikes, both in case of epidemic occurrence and not.