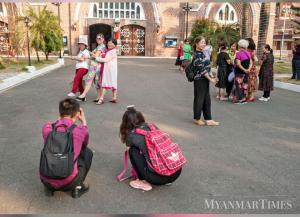 The decision was made after investigations at souvenir shops located in Hlaing Tharyar township, East Dagon township and People’s Park in Dagon township, where zero-dollar tourists usually frequent. Negotiations were also made with the relevant authorities to supervise and ensure commercial tax on sales is being paid, she added.

The Central Bank of Myanmar (CBM) has also instructed local shops to temporarily suspend digital payments on Alipay and WeChatPay, according to deputy minister of Hotel and Tourism U Tin Latt at a Pyithu Hluttaw meeting on December 10.

The CBM’s decision comes after it allowed WeChat to be used in limited areas under a trial period of six months this year.

“Myanmar is not ready for the digital currency system. There is no law governing cybersecurity and digital currencies. The CBM is not yet technologically equipped to monitor digital transactions. So it will not be easy to manage online payments. As such, it has temporarily instructed transactions to be cash only,” Daw Naw Pan Thuzar said.

In 2020, the authorities will conduct spot checks on unlicensed tour agencies, tour guides, and zero-budget tour operators in Yangon Region to ensure compliance, she added.

Due to the way in which these tours operate, the local economy does not benefit much and governments often lose out on tax revenue as payments are often routed through Chinese digital platforms and skirt taxes.

U Pann Min, a Chinese-speaking tour guide said it will not be easy to control or prevent online payments.

“It is not easy to prevent these tourists from making online payments. As they are from the same country, they can make payments in many ways. It’ll be effective if unannounced inspections can be made, and taxes are charged on outgoing goods by customs. Even if they pay though vouchers, we should check if they are buying the items at the current prices. They can show only US$100 dollars on the voucher for a US$1000 item purchased,” he said.

Zero-budget tourists who enter Myanmar are found to spend less compared to those from other countries.

Going forward, action will be taken on operators offering tour packages at lower prices under the Myanmar Competition Law. During non-peak tourism periods in Myanmar, there have been cases where hotels and restaurants were rented one year in advance at lower rental prices for zero-budget tourists.

Zero-dollar tourism began expanding after Myanmar eased visa requirements for visitors from China by allowing them to get visas on arrival for a period of one year from the beginning of last October to the end of this September to boost tourism.

From January to October this year, over 590,000 Chinese tourists have visited Myanmar, according to statistics from the Ministry of Hotels and Tourism.