Women of Teluk Bintuni, West Papua, and their mangroves

WEST PAPUA, Indonesia – Teluk Bintuni regency in West Papua has a mangrove forest covering more than 200,000 hectares with a high degree of biodiversity. This portrait series showcases how women in Teluk Bintuni and nature are living side by side in harmony. Apart from taking care of their families, the women are also engaged in various group activities to safeguard their natural environment and promote the local community’s conservation- and customs-oriented economy.

The biodiversity in Teluk Bintuni is among the best in the world, after Raja Ampat in the same province, constituting 10 percent of Indonesia’s mangrove forests. 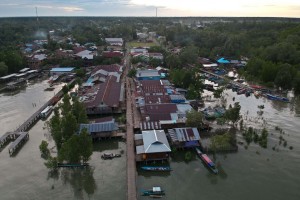 In the 1980s, the World Wide Fund for Nature (WWF) proposed that the regency’s mangrove forest be made a nature reserve, which was followed up by the Conservation International (CI) and later by the regency administration.

When it was converted into a nature reserve Teluk Bintuni became a national strategic zone, like Raja Ampat.

One of the local government’s priorities involves improving conservation-based development programs because of the mangrove’s important role in carbon trading.

Empowering the community to support conservation programs has also become an important strategy, along with other efforts, such as the organization of the World Mangrove Festival in November.