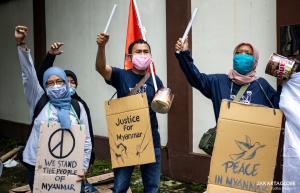 Jakarta. The Foreign Affairs Ministry said they still could not confirm the special Asean foreign ministerial session on the Myanmar coup, which would reportedly take place on Tuesday.

The ministry’s spokesman Teuku Faizasyah said they are still waiting for an official announcement from the bloc’s current chair Brunei Darussalam.

“It is best if we wait for Brunei’s announcement as Asean chair,” Faizasyah told Jakarta Globe’s sister publication Beritasatu on Monday.

According to Faizasyah, Foreign Affairs Minister Retno Marsudi plans to reach out to her Asean and international partners to discuss Myanmar’s political turmoil. The spokesman, however, did not go into further detail.

Last Friday, Kyodo News reported Asean’s foreign ministers would hold a special meeting on Myanmar on March 2. This would be Asean’s first meeting since the coup dawned in early February. The report stated Myanmar’s top diplomat U Wanna Maung Lwin was asked to attend the session.

Indonesia also expressed condolences over the escalating tension in Myanmar.

“Indonesia is deeply concerned with the escalating violence in Myanmar that has resulted in casualties and the loss of lives. Our deepest condolences go out to the victims and their families,” the Foreign Affairs Ministry wrote on an official statement on Sunday.

“Indonesia urges the security forces to refrain from the use of force and exercise utmost restraint to avoid further casualties and prevent the situation from deteriorating,” the ministry added.