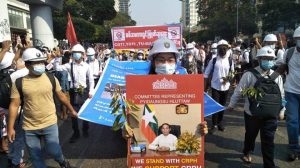 An anti-regime protester holds a placard supporting the CRPH, formed by ousted elected lawmakers, in Yangon on Monday. / The Irrawaddy

A committee formed by elected members of Myanmar’s ousted Parliament that seeks recognition as the country’s legitimate legislature has nominated two members to serve as its representatives to the UN and for international relations.

The CRPH issued two statements on Monday announcing the nominations of Dr. Sasa, a doctor and philanthropist, as its special envoy to the UN, and U Htin Lin Aung as its representative for international relations.

The committee also announced that it had opened an International Relations Office in the US state of Maryland on Feb. 22, in order to communicate with the UN, international governments and international organizations, and to conduct bilateral relations.

U Htin Lin Aung, a former political prisoner who took part in student movements in the 1990s, is currently living in Maryland after leaving Myanmar in 2008, a year after the Saffron Revolution, a mass protest movement that was violently quelled by the government.

Dr. Sasa, whose Health and Hope Foundation has been working to promote development in Chin State and training villagers to become community health workers, has become well-known in the region for his humanitarian work over the past decade. A fresh face in politics, his involvement in election campaigning in Chin State in November made him known to the wider public across Myanmar.

The CRPH has urged the international community to reject the coup makers’ regime and to direct official communications involving Myanmar to the committee.

Millions of Myanmar citizens are participating in daily demonstrations rejecting the coup and the military regime, calling for the restoration of the elected government and the release of the detained leaders, and urging the international community to help Myanmar restore democracy.

U Aung Myo Min, a veteran human rights advocate, said, “The CRPH’s move is aimed at getting its message out to the international community as much as possible,” just as the now defunct Committee Representing the People’s Parliament did back in the late 1990s.

Some high public expectations about Dr. Sasa’s role arose following the announcement, with some supporters of the CRPH urging it to defy the regime by declaring Dr. Sasa a replacement for U Myint Thu, Myanmar’s permanent representative to the UN, who defended the coup leaders at a UN Human Rights Council meeting this month.

The mandate of both men is limited to representing the committee, but their roles includes lobbying activities and representing the elected parliamentarians, the human rights advocate said.

Dr. Sasa could lobby members of the international community at the UN, but it would be hard for him to get a seat at formal meetings, because the CRPH is currently just a legislative committee, he added.