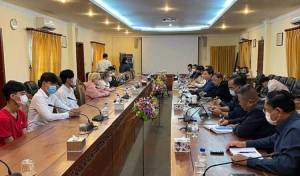 The Ministry of Culture hauled in eight performers of Tum Teav 2021. Photo supplied

The Ministry of Culture yesterday hauled in eight performers of Tum Teav 2021, a short clip on the Facebook page Hokima, for filming a sensitive clip that touches on religion, national culture and tradition.

Disclosing this on the Ministry of Culture’s Facebook page,  the performers took a pledge to stop doing anything that is detrimental and sensitive to religion, culture, tradition and society.

In a meeting held with the ministry’s Council of Discipline and Praise officials, the director Teng Sinath, who is also an actress, and her team acknowledged that they had used bad words and depicted a negative portrayal that could cause harm to the culture, traditions, religion and society.

The performers promised to follow the rules in the contract such as not to commit and participate in any negative activities or attitudes or use words which will create sensitivity and harm to culture, traditions, religion and society. They also pledged not show indecency on social media.

The performers have agreed to use their skills to help support culture, traditions, religion and society at large and agreed to give the Facebook page Hokima and the Tik Tok account named Ah Gi Leader261 to the ministry to manage and delete.

The ministry on their Facebook page said that the performers also promised not to copy the data from the accounts of the said Facebook and Tik Tok for future use and publicly apologised in front of the reporters for their wrongdoing.

The performers also said that they would take responsibility if they were caught doing so again and face the law.

Meanwhile, on Tuesday a Facebook account holder named J NI Cosmetic was hauled in for posting a video of a person wearing a sexy outfit to promote breast enlargement pills.

In a contract made at the Phnom Penh Municipal Police, the account holder promised to cease all such activities that affected the honour and dignity of the Cambodian people.

The owner acknowledged her mistake and made a public apology, especially to all Cambodian women, and promised not to go live with the video again.

He said that some online promoters wear sexy clothes to advertise their products on social media.

“Those wearing sexy clothes to promote the sale of products online are affecting the moral values and dignity of Khmer women,” Mr Hun Sen said.