While hero Sukdave Singh values the pewter plaque for bravery, he feels neglected by the authorities. (Denne Singh pic).

The day passed like any other in past decades with no visitors, and birthday greetings only from family members.

It was the same every August 4, the day 45 years ago when he became a national hero after being shot in the right eye while investigating a “robbery” that turned out to be a hostage crisis.

JRA fanatics stormed the ninth floor of the building and took 53 people hostage from the US and Swedish embassies, the AIA agency office and a Japanese firm, C Itoh.

Today, Sukdave, who may not be known to younger Malaysians, is like a hostage left behind and long forgotten.

He is helpless, depressed – spirit crushed.

Looking desolate, he told FMT at his Taman Sri Ampang home that life wasn’t easy for him over the years with the nightmares and scars, both physical and mental. 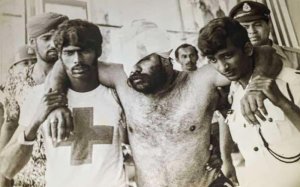 A heavily bandaged Sukdave Singh, then 29, being led to an ambulance after he was shot under his right eye by JRA when he went to investigate intruders in the AIA building. (Sukdave Singh pic).

He was 29 when he lost sight in his right eye after a shot fired by a terrorist went under the eye and out at the back.

The bullet was found embedded in the wall of the elevator from where he had stuck his turbaned head out to spot the intruders.

The injury to his eye caused his jaw to be misaligned, resulted in headaches and blackouts and forced an operation on his tonsils.

He spent about 75 days in hospital and had to postpone his wedding to Kuldip Kaur to May 16, 1976 which coincidentally is her birthday.

Both his legs are weak and he had to stop riding his motorcycle after falling off several times.

Sukdave needs cataract surgery in his left eye but has been putting it off to look after ailing Kuldip, 64.

His two-room terrace home is infested with white ants and he doesn’t have the money to call pest control.

Since his wife sleeps on a bed downstairs, he struggles to climb the narrow, steep staircase to retire for the night.

Sukdave said he remained idle at home after stopping work as a watchman two years ago and missed cooking at the Gurdwara Sahib Ampang, Ulu Klang, where he did community service for over three decades.

He said his two sons and two daughters had their own family obligations looking after his seven grandchildren.

Considering that he was a key character in one of the most significant events in Malaysia’s history, it hurts that he was forgotten soon after he left the headlines.

Like when police stopped a passing ambulance, rushing a patient to the general hospital, to take the heavily bandaged Sukdave along after waiting for about an hour for the rescue vehicle.

And when he was shot by the radical who may have mistaken him for a cop as his khaki turban was the same as the one worn by Sikh policemen.

In between, he told stories about his zest for life, his passion for community service, the graceful way in which he battled his ailments and, above all, his love for his wife.

As a 29-year-old security guard, Sukdave was returning to the AIA building to take sick leave.

There was a sense in the air that something was coming down that morning, Sukdave said. It did, at 10.45am.

He was told by his superior Mahinder Singh a robbery was in progress on level nine.

He was soon to discover that the consular section of the US embassy had been seized by militants dressed in lounge suits, with handkerchiefs over their faces, and armed with guns, bombs and hand grenades.

It happened at a time when Malaysia, fighting the Communist Party of Malaya, was suddenly faced with its first hostage crisis.

The ultra-leftist JRA demanded that seven of their imprisoned leaders in Japan be released and threatened to massacre all the hostages if their demands were not met.

They released the women and child hostages after two days while the last 15 male hostages were taken to Subang International Airport and held on a Japan Airlines DC-8 for another two days.

Sukdave pointed to a news report in his collection about a primary headmaster, Ken Appadurai, from Johol near Seremban, who stood in as the bus conductor on the bus taking the terrorists and hostages to the airport as he spoke Japanese.

Then home minister Ghazali Shafie, who was the chief negotiator with the JRA terrorists, presenting a pewter plaque, on behalf of the American Embassy Malaysia Employees Association, to Sukdave Singh. (Sukdave Singh pic)

The late Appadurai learnt the language during the Japanese Occupation of Malaya from 1941-1945.

They were holed up in the plane due to negotiations with several countries for the route and destination for the hostage-takers and five members of the seven men who had been flown in from Tokyo.

He recalled that then deputy transport minister Ramli Omar and home ministry secretary-general Osman Samsuddin Cassim were exchanged as hostages to guarantee the safety of the militants to Libya where they were sheltered by Muammar Gaddafi.

Sukdave said it was unfair that Osman and Ramli returned home to a hero’s welcome and were given bravery awards while he and the two other policemen, who were also shot at the AIA building, were forgotten.

He was referring to constables, crime buster V Amurthalingam and Ku Ahmad Ku Razak of the Federal Reserve Unit.

Sukdave is bitter that the three of them were not given compensation by the governments of Malaysia, Japan, USA and Sweden.

He recalled that Amurthalingam, who died 10 years ago, was shot in the jaw during an exchange of fire on the ninth floor.

Ku Ahmad, with whom Sukdave had lost touch with many years ago, was hit in the thigh soon after he occupied the spot in the carpark vacated by a US embassy photographer.

The cameraman had aimed his zoom lens at the ninth floor which may have led the gunman to think it was a weapon, said Sukdave.

While he could not recount what Amurthalingam and Ku Ahmad got for their heroics, Sukdave received a thank you letter and a Seiko watch from then Japanese ambassador Michiaki Suma on Sept 5, 1975.

Sukdave, who began work with AIA on June 6, 1966 with a basic pay of $100, received $2,000 from the company that also covered his medical costs until his retirement which was extended until in 2003.

On March 3, 1976, Sukdave, Amurthalingam and Ku Ahmad received a pewter plaque and ‘Gallantry Honour Award’ from the Malaysian Employees Association of the American embassy.

Sukdave’s citation read: “For outstanding bravery, risking his own life for the safety of the entire occupants of the AIA building in attempting to arrest the Japanese Red Army invaders on the ninth floor.”

He said while the compliment was heartfelt, it was not enough to assuage the hurt of being ignored by the authorities.

Tearing up, Sukdave said: “These days, when I read about people being rewarded with money and in kind for acts of bravery, I get frustrated over the three of us being neglected.”

“Nothing makes you feel better than knowing you risked your life to save lives and got appreciated,” he said.

Sukdave’s memories of the incident – local and foreign newspaper clippings and blown up photographs – are all in paper bags and worn out files. The plaque sits proudly on a table in the living room.

His collection also contains the history of the JRA madmen who fought for a global communist revolution and earned worldwide notoriety in 1972 when its commandos sprayed Israel’s Lod International Airport in Tel Aviv with gunfire, killing 24 people and wounding 76 others.

The attack earned the Red Army a place of honour in the Palestinian guerrilla movement and was followed by a series of hijackings and attacks on embassies in the 1970s and 1980s.

The guerrilla group, founded in 1971 by Fusako Shigenobu, once labelled as “the most feared female terrorist in the world” and based in Lebanon was formally disbanded in 2001.

Sukdave’s friend, Denne Singh, who accompanied FMT to the interview said: “Cruel fate seems to be ganging up on him and it is painful to watch.

“He has been unfortunate with setbacks to his life and he deserves an opportunity to find a way through his nightmare.”