Indonesia – After a year of Papuan antiracism rallies, discrimination remains an everyday occurrence 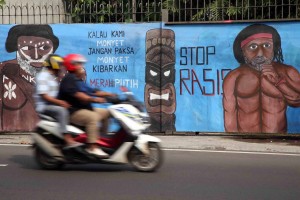 A mural reads depicting two Papuans reads: “If we are monkeys, don’t force monkeys to raise the red and white [Indonesian] flag. Stop racism.” Displayed on a road connecting Depok and Bogor, West Java, the mural refers to an incident in Surabaya, East Java, in which a Papuan student was called a “monkey”. The incident led to a string of antiracism protests. (JP/P.J.Leo)

JAYAPUURA, Papua – Musa Heselo, a resident of Jayapura, Papua, was not aware that he had frequently been discriminated against on the basis of his race. In fact, he never understood how discrimination and racism could manifest themselves in his everyday life.

To Musa, being treated differently in public is a normal part of his routine. It’s not as though the situation was unique to him; after all, other Papuans, particularly the indigenous natives, have also experienced similar treatment, he said.

“A few times I had lunch at a local food stall in Arso, Keerom regency, along with some friends who hailed from Java and Sulawesi. My friends were told to help themselves to the food on display; I was the only one who was served by the attendant,” Musa said.

He eventually grew to understand how discrimination could impact the lives of Papuans, especially in the wake of the antiracism protests that made news headlines last year.

It has been a year since the string of antiracism rallies in Papuan regencies and cities, and racism is still alive and well in Papua, Papuan activists say.

The wave of protests in West Papua and Papua was triggered by an ambush at a Papuan student dormitory in Surabaya, East Java, by the Communication Forum of Indonesian Veterans’ Children (FKPPI).

Tri Susanti, one of the group’s leaders, had allegedly spread the rumor that the Papuan students had defaced the Indonesian flag. The group then launched verbal attacks — which included racial slurs — against the students. A video of the ambush, in which some people called the students “monkey” from outside the dormitory’s gate, angered Papuans.

The ambush was met with condemnation in Papua. Before long, a string of similar protests cropped up in several regions across the archipelago, including Papua and West Papua. Some of the protests turned violent. A protest in Wamena, for instance, escalated into full-blown riots in September last year. The events that unfolded over the course of two months resulted in 50 known deaths.

Racial discrimination against indigenous Papuans is not a recent phenomenon, according to local public figure Benny Giay. The discrimination dates back to the 1960s when Papua was still in the transition period between being a Dutch colony and an Indonesian region, he said.

The Indonesian government even had a role in instilling racial prejudices against Papuans in order to develop a sense of nationalism among Papuans themselves during that time, he added.

“From May 3 to 4, 1963, Indonesian officials in Papua burned books about Papua in front of the present-day Papuan Regional Legislative Council [DPRD] building,” Benny said. “Consequently, Papua was left with little to no history of itself.”

Benny said the racial prejudices against Papua were a foundation upon which the so-called “national development” was built in the region.

“Papuan history and culture were eliminated to reinforce the idea that native Papuans were a primitive society.”

Only after the very identity of Papuans was dismantled could Indonesia be free to “nationalize” the region, according to Benny.

“Racism served as the basic building block of national development in Papua. A popular refrain at that time was ‘elevating the people of West Irian so they become equal to other tribes in Indonesia’.”

Such a historical precedent proved that racial discrimination against Papuans – the likes of which occurred as recently as last year, could happen again the coming years – he added.

According to Alex Gobay, the head of the Jayapura University of Science and Technology’s (USTJ) Student Executive Body, racial prejudices against Papuans has become systemic and institutionalized.

Spreading protests against racism in Papuan provinces in 2019. (JP/Swi)

“The fact that Papuans who are discriminated against end up in prison shows that racism has seeped into the system,” said Alex, who served 10 months in jail for participating in an antiracism protest himself last year.

Democratic Alliance for Papua director Latifah Anum Siregar said the Indonesian law, in general, had been weaponized against Papuans because of systemic racism.

“Native Papuans are deprived of their freedom of speech and expression. No sooner had Papuans voiced their aspirations, they were charged with treason,” Latifah said, adding that many Papuans did not receive any legal assistance.

In the context of last year’s antiracism protests, then-National Police chief Tito Karnavian accused the United Liberation Movement for West Papua (ULMWP) and the National Committee for West Papua (KNPB) of triggering the spate of riots across Papua and West Papua, she said.

Latifah called on the government to rectify the system by pushing for tolerance and professionalism in the legal system.

However, government officials in Jakarta denied claims of systemic racism in Papua and West Papua provinces.

Presidential Office undersecretary V Jaleswari Pramodhawardani wrote in an op-ed in Kompas that the opposite had happened, that the government had worked hard to accelerate the betterment of Papuans’ welfare. She said the accusations of racism were part of a smear campaign spread by Papuan activists.

He said the #PapuanLivesMatter campaign was not based on reality in Papua. He claimed there was no systemic and structural racism in Papua and he argued that  “the special autonomy law gives locals the privilege to administer their province”.

“Ever since before the Otsus until today, almost 20 years after the Otsus, racism toward Papuans, land grabbing, military operations, rights abuse and social and economic inequality keep happening in Papua,” Papuan Students Alliance head John Gobay said in July.

Amnesty International Indonesia executive director Usman Hamid believed the central government had yet to shift its political and economic outlook to truly comprehend the situation in Papua.

“So, I don’t think that there will be any significant changes in the political attitude [toward Papua] in the wake of the antiracism protests,” Usman told the Post.

In an op-ed published by the Indonesia at Melbourne website on Monday, Usman said the government needed to understand that when people talk about Papua, they talk about “injustice, racism, persecution and political violence that preoccupies the minds and work of activists — not simply separatism”.

“Unfortunately, the government has consistently failed to acknowledge this basic fact. In the past few weeks, it has peddled the old misguided narrative about Papua that attempts to shut down any legitimate criticism of how Jakarta unfairly treats native Papuans, by framing that criticism as an effort to compromise Indonesia’s territorial integrity.” (rfa)