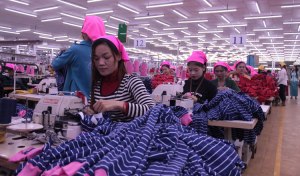 Garment factory workers will be affected by a potential EBA suspension. Khmer Times

BEIJING, China – President Xi Jinping has reassured Prime Minister Hun Sen that China will continue to support the Kingdom’s economy despite a potential Everything-but-arms suspension by the European Commission this month.

Kao Kim Hourn, Minister Delegate attached to the Prime Minister, said Mr Xi made the statement to Mr Hun Sen during the latter’s visit to China on Wednesday to show support for the fight against the coronavirus outbreak.

“I know Cambodia is being pressured by the European Union over EBA,” Mr Kim Hourn said, quoting Mr Xi. “No matter what, Cambodia should not bow to the EU.”

“Some [western] countries attempt to provoke a colour revolution in Cambodia,” he said, quoting Mr Xi.

Cambodian imports under the EBA accounted for 18 percent of all imports coming into the EU market under the scheme last year. The imports, which included clothes and textile products, were worth about $6 billion in 2018.

The EBA scheme allows Cambodian goods to enter the EU market 99 percent tariff-free. The loss of the EBA is predicted to cost Cambodia millions of dollars, along with risking the jobs of 800,000 people employed in the Kingdom’s garment and textile manufacturing sector.

The European Commission is set to decide the fate of Cambodia’s preferential EBA trade status next week.

The EBA has been under review due to perceived democratic and human right setbacks following the Supreme Court dissolution of the opposition Cambodia National Rescue Party and the arrest of its leader Kem Sokha over treason charges in 2017.

According to a European Parliament report issued last year, a suspension would take affect in August.

“Depending on developments in the country, the Commission has to decide by February 2020 whether or not to suspend Cambodia’s EBA privileges fully or in part. A suspension will come into effect six months later, by August 2020,” the report said. It noted improvements the government has made to expand political space for former opposition party members.

“The Cambodian authorities have made some concessions. In 2018, several political prisoners were released, including opposition leader Kem Sokha,” the report said. “Over 100 remaining senior members of his CNRP party were offered a chance to apply for authorisation to resume their political activities.”

Sokha has been in court since January 15 over treason charges, and the trial is expected to last three months.

Mr Hun Sen in a recent speech reiterated the Kingdom will not exchange its sovereignty and independence to retain the EBA status.

Cambodia is on the verge of signing a free trade agreement with China. In December, both countries launched its first official FTA consultation.

Mr Kim Hourn yesterday said Mr Hun Sen and Mr Xi in their meeting agreed during  to expedite the signing of the agreement, but did  not specify when.

“Cambodia needs to look after Chinese factory owners and businessmen so they continue investing in the Kingdom,” he said, quoting Mr Xi. “I want Cambodia to study how Chinese companies are going to be affected [by the EBA withdrawal].”

“China must help push its scrupulous and wealthy investors to invest in Cambodia and open its market for Cambodian products,” he said.

Mr Touch said Cambodia must now step up its fight against corruption and encourage a better investment environment.

He said local agricultural products marked for import must be diversified, while infrastructure issues must be addressed to boost competitiveness.

“It is so Cambodia can be self-sufficient,” Mr Touch said.