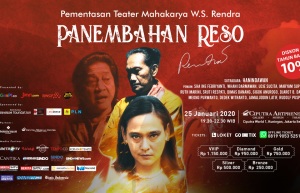 JAKARTA, INDONESIA –  “Panembahan Reso,” a classic play that tells the story of a bloody power struggle and a barely disguised critique of New Order politics, written by the late, great Indonesian playwright and poet W.S. Rendra, will grace the stage again after an absence of 34 years at the Ciputra Artpreneur in South Jakarta this weekend.

The flamboyant Rendra, nicknamed “The Peacock” at the height of his fame in the 1970s and ’80s, often dealt with social and political issues in his works. This includes Panembahan Reso, an almost like-for-like comparison for the repressive New Order government.

Originally performed by Rendra’s theater company, Bengkel Teater, in 1986, the story of the play takes place in a palace with an old king, “Raja Tua,” at the throne, and his mistresses and children competing with one another for power.

The play’s anti-hero is Panji Reso, played by Whani Darmawan, a representation of man’s overwhelming greed for power and more than a nod to New Order dictator Soeharto, who never hesitates to resort to bloodshed to outmaneuver his competitors.

For the play’s first performance in 34 years, director Hanindawan has cast experienced actors from top theater companies in Solo, Yogyakarta and Jakarta.

The play will feature former members of Bengkel Teater and also household names such as actress Sha Ine Febriyanti, who will play Ratu Dara (The Virgin Queen).

“Panembahan Reso has never been staged by anyone since 1984. Maybe some fragments for a dramatic reading here and there, but no theater company has ever taken it on again until now,” wife of the late Rendra, Ken Zuraida, said in a promotional video.

Director Hanindawan has trimmed the original six-hour play to three hours but managed to retain all the characters and the plot twists.

He has also given the play some modern touches, including a modern mini-orchestra and contemporary choreography.

Tickets for Panembahan Reso are available from Go-Tix, Loket and the Ciputra Artpreneur website.