Aiming to be the best fishing tourism destination in the world, Indonesia will host the 2018 Indonesia Fishing Tournament.

Indonesia is aiming to be the best fishing tourism destination in the world. 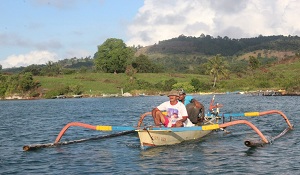 “The first event of the tournament will be held in Banggai, Central Sulawesi, in the near future. We have also set the fishing zone in Banggai to be promoted as a fishing tourism site,” he said.

Soesilo stated his hope that the tournament would be the beginnings of developing fishing tourism as an activity with economic value. “We are finalizing the draft of the Recreational Fishing Guide,” he said.

Antara news agency reported that the government had started to map potential marine tourism destinations where activities could be developed such as diving, kayaking, snorkeling and surfing.

The Tourism Law states that fishing tourism is a marine tourism product. However, its development is considered slow, especially compared to diving tourism, with spots in Indonesia that are recognized as world class.

Last year, the country hosted the 2017 Widi International Fishing Tournament on Widi Island, South Halmahera regency, North Maluku. It abided by the international standard set by the International Game Fish Association (IGFA) and The Billfish Foundation (TBF). Around 1,500 people took part in the tournament, with 175 coming from Japan, Australia, Malaysia, Singapore, the Philippines, Thailand and the United States. (wng)