Over the past few years residents and regular visitors to Yangon have witnessed the slow but steady transformation of some of the city’s back alleys from dingy, rubbish-strewn and mosquito-infested spaces, into vibrant children’s  playgrounds and photo locations for adults.

Closed and dirty parks have also been transformed into recreational places for both the young and the old alike. 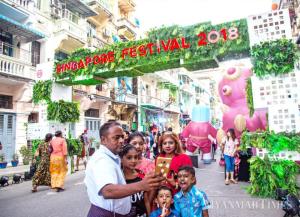 Thanks to the Yangon regional government’s openness to cooperating with international and local non-government organisations, the city is slowly becoming a hive of activity for both local and international events, once again becoming a fun city it used to be as. 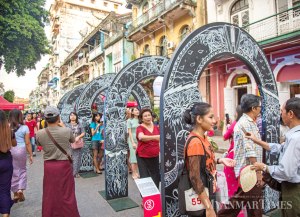 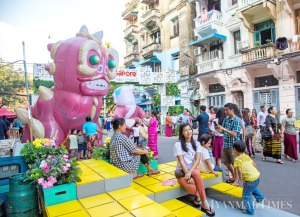 Although the very first weekend of December was packed with weekend bazaars, the third edition of the Singapore Festival held at Bogalayzay Street from November 30 to December 2 turned out to be a major hit, not only among foreign visitors but also fun-loving Yangonites.

The Singapore Festival shut down Bogalayzay Street (between Merchant Road and Maharbandoola Road) for three days and for a fleeting moment became transformed into a cultural lane divided into four themed zones dubbed: culture, explorer, socialisers and of course foodies zones, that showcased not only the culture of Singapore but of Myanmar as well.

“This year we really want to try something different” Chang Chee Pey, assistant chief executive with the international group of the Singapore Tourism Board told reporters at the opening of the festival at Pansuriya Gallery.

“We wanted to hold an event that will impact the local community. So, we cooperated with local NGOs to see how we could best bring the scene of the festival out to the Bokalayzay Street.

It took almost five months for them to engage the local residents as well as the businesses along Bogalayzay Street, but it was worth all the effort.

“Luckily, we were very happy to see that the residents and businesses are very welcoming to us”, he added.

From the opening day of the festival, it drew the attention of the visitors and passersby alike, many of whom were surprised by the scale of the event.

U Ko Moe Lwin, a resident of Bogalayzay Street said he was proud that the street had become a hive of activities and hosted the Singapore Festival.

“We’re proud of our community, history and the unique memories we have formed on this street over the years. I hope that festivals like this can be held in our street every year to remind us of our childhood and create new memories with our friends and neighbours,” he said.

Visitors to the event were first greeted by the cultural zone, which showcased the cultures and arts of Singapore and Myanmar and ended up with the foodies zone. The visitors go to view “Atypical Singapore”, an art installation enabled by augmented reality technology featuring the work of seven contemporary artists from Singapore and watch as art came to life by via the Facebook in-app camera.

Visitors also saw live graffiti performances by local graffiti artist group, ROAR, who created artworks on the walls of the Gamone Pwint Shopping Centre (once home to the Royal hotel around 1910). ROAR’s works will be visible until the end of December.

In the explorer and socialiser zones, social enterprise Doh Eain and Momo Play set up playgrounds for children, games, maps of Yangon, as well as workshops. There were also photo booths of Singapore attractions’ where visitors could take photos. Alongside magic, juggling, fire, stilt walking shows, a jazz band and live performances by singer He’ Lay and THELIONCITYBOY took place along the street.

Bogalayzay Street is full of rich history that many Yangonites and visitors alike would be surprised to know. The street was known as Brooking Street during colonial times until it was changed after independence in 1948.

It was also once the home to the Royal Hotel (now Gamone Pwint Shopping Center) in 1910 which stood at the corner of Brooking Street and 42nd Street. Another cultural and historical asset of Bogalayzay Street is the Young Women’s Christian Association building which was inaugurated in 1902.

Of course, the most crowded and attractive of all the zones was the foodies zone, where 20 different dishes from Singapore and Yangon street food were on sale for K500 (31 US cents). Some people were lining up while many others were jostling to join the lines for the food. It was good that the organisers arranged for enough tables for the visitors who want to sit and eat with their families.

During the three-day-long festival, the shops along Bogalayzay Street also offered discounts and promotions to join the celebration.

No doubt, the Singapore Festival 2018 was an astounding success and was able to achieve its goal of showcasing the diverse culture through street food, contemporary art and entertainment of the island state.

The Singapore festival was initiated in 2016 by the Singapore Tourism Board but the first two editions were held inside a mall. This was the first time held at the Bogalayzay Street.