In KL, Malaysian women march to reclaim their space

KUALA LUMPUR, Malaysia — Hundreds of Malaysians, most of them women, took to the streets of Kuala Lumpur today to march in conjunction with the International Women’s Day this week.

The around 1-km march this year, from the Sogo shopping mall to Tugu Takraw at the Jamek Mosque, is aimed at reclaiming women’s space in the public.

Human rights activist Maria Chin Abdullah said the issue of gender discrimination must not be overlooked.

“It is high time that we raise concerns over violence against women and gender prejudices,” Maria told Malay Mail at the sidelines.

There are five demands of the march today: to eliminate gender discrimination, destroy rape culture and sexual violence, strengthen rights for political space and democracy for all, strive for equal opportunities and wages, and stop the destruction of environment.

The placards seen today championed a diverse array of issues, from ending discrimination against the queer, rights for domestic workers, and press freedom.

The placards seen today championed a diverse array of issues, from ending discrimination against the queer, rights for domestic workers, and press freedom.

Activist Diyana Yahaya said despite the rise of many successul women in various sectors, women are still considered inexperienced to talk in many forums.
“This is 2018 yet there are still people out there who think we only belong at home and should not have a say in anything,” said the programme officer for Asia Pacifc Forum on Women, Law and Development.

“Women have a say in everything from trade deals to environmental issues to matters of governance. People should not think that we are only constricted to only talk about domestic violence.”

A representative of the indigenous community of Pahang, Fatimah Bahsin, said women in the Orang Asli community face harsher challenges to climb up of the socio-economic ladder.

“We depend heavily on the land to provide for us. However if our community faces deforestation or logging activities, our skills to forage for food and even medicine would be useless.

“What we need is equal opportunities in education and economic development so that we provide for our as well,” she said. 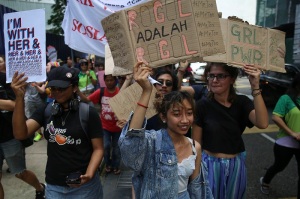 People chant slogans and hold up posters as they take part in a march to commemorate International Women’s Day 2018 in Kuala Lumpur March 10, 2018.“If you look at the number of university students, you will see a higher number of women attending higher learning institutions and yet that number does not translate into a higher number of female directors or corporate executive.

“People are now only realising this and want greater women representation in all spectrum,” he said.

The Department of Statistics’ latest data showed that there are 107 men for every 100 women in Malaysia.

In the Global Gender Gap Index 2016 report by the World Economic Forum, Malaysia was ranked 75th out of 144 countries, and 9th in the Asia-Pacific region below neighbours like the Philippines, New Zealand, Laos, and Australia.

Earlier this week, the Human Rights Commission of Malaysia (Suhakam) had also urged against the use of religion, tradition or culture to discriminate against women here, pointing out that Malaysia was nowhere near international standards with regards to women’s rights.